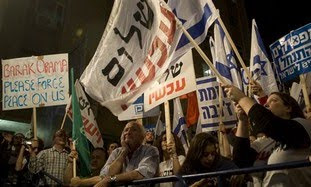 National Left, Peace Now groups call for "an end to the occupation."

Under the banner "Zionists are not settlers!" thousands of left-wing activists held a rally near Zion Square in Jerusalem on Saturday night to voice their disapproval of current government policy and to declare their support for a "Jewish state, for the Jewish people, with clear and recognized borders. The large demonstration, which was organized by the National Left (Smol Leumi) movement, Peace Now and "Ofek" - the Meretz faction at Hebrew University - lasted nearly an hour and featured brief remarks from each of the movements' representatives.

Eldad Yaniv, Labor chairman Ehud Barak’s former bureau chief, and one of the National Left movement's founders, addressed the cheering crowd, saying, "We're calling for an end to the occupation - with or without an agreement!"

"We're calling for a Jewish state, for the Jewish people with clear and recognized borders!" he said. "Not a Jewish state built on settlements and discrimination!"

Yaniv's fledgling political movement aims to rebuild the Left from the ground up, encourage Zionism among the left wing, and serve as an umbrella for parties to the left of Kadima in the next election.

“We have been working for months to wake up the Zionist Left in Israel,” Yaniv told The Jerusalem Post last week. "We have held parlor meetings across the country three or four times a week, and now we have decided to return to the streets with Israeli flags and say that Zionists aren’t settlers, and that the time has come to end the occupation and build a society that can be a light unto the nations.”

Additionally, the throngs of participants - police estimated the crowd at 2,000, organizers put that number closer to 5,000 - could be heard chanting slogans enthusiastically and cheering the speakers on.

"We are here tonight to reclaim the Zionism of Ben-Gurion," one participant, Tzachi, from Tel-Aviv, told The Jerusalem Post. "We're tired of Zionism being associated with the right-wing only, and we came out tonight, to Jerusalem, the capital, to let our voices be heard."

While a number of buses brought in scores of demonstrators from Tel-Aviv and other locations across the country, a large contingent of Jerusalem residents had turned out for the protest as well.

"Living in this city, working or studying here, you can really feel that there are segments of the population that are trying to hijack the political process and shut out anyone who doesn't fit their mold," downtown resident Alon Zehavi told the Post.

"I felt it quite strongly while watching the Jerusalem Day parade last Wednesday," he continued. "All I could see were yeshiva students and settlers, dancing and cheering their way towards the Old City. The crowd was so homogeneous."

"And as someone who sees their future here in this city and in this country, it was important to me to come down here tonight and make my voice heard. Because I am left-wing, I am a Zionist, and it's important to me that [Israel] remains a Jewish, democratic state."

Gil Hoffman contributed to this report
Posted by GS Don Morris, Ph.D./Chana Givon at 6:44 AM