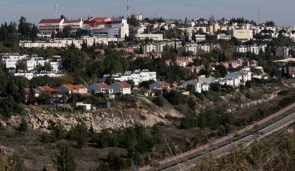 Residents of former Gaza settlement Netzarim had been in the throes of building neighborhood in Ariel when Israel declared a 10-month construction freeze.
By Jonathan Lis

Fifty-six members of Knesset on Thursday petitioned Prime Minister Benjamin Netanyahu and Defense Minister Ehud Barak to allow construction of a neighborhood in the West Bank settlement of Ariel, despite Israel's promise to freeze building there for 10 months. The neighborhood in question would be constructed for evacuees of the former Gaza Strip settlement of Netzarim, who have been without permanent housing since Israel's disengagement in 2005.

The petition was initiated by Likud MK Ze'ev Elkin and National Union MK Aryeh Eldad, and was signed by most Kadima lawmakers and Labor MK Eitan Cabel.

"Despite the many hardships they endured, including temporary housing for almost five years in caravans and trailers, [the evacuees of Netzarim] have built a spending community and contributed much to the spiritual life and found a solution to the welfare troubles in the city of Ariel," the MKs wrote in their petition.

The lawmakers added that the project to see permanent housing for these evacuees has met a number of difficulties, including legal and budget problems.

"About six months ago – when they had already overcome the difficulties, raised the needed funds, and the project seemed to be already in its opening stages – it was stopped once again when the cabinet decided to freeze [settlement construction]," the MKS wrote.

In their petition, the lawmakers claimed that every day permanent housing for these evacuees was delayed was another injustice. They called on Netanyahu and Barak "to intervene personally and immediately, to bring urgently bring an end to the foot-dragging, to approve an exception to the freeze and advance the project of Netzar Groves in Ariel."