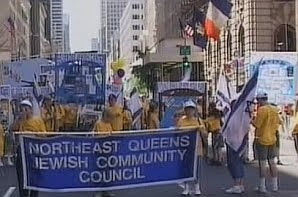 NEW YORK – Despite gray skies that threatened rain, tens of thousands of people turned out for a massive celebration of Israel on Sunday, at the annual Salute to Israel Parade on Manhattan’s Fifth Avenue. “What’s most important is the sheer volume of people marching up the avenue, many of whom are Jewish and many of whom are not Jewish,” said Michael Miller, executive vice president and CEO of the Jewish Community Relations Council of New York, which oversees the event. “It’s a New York event in support of Israel.”

Marching bands, groups hoisting colorful signs and costumed marchers converged along the parade route, running up Fifth Avenue between 57th Street and 74th Street. Celebrities, elected officials and dignitaries were on hand, including New York City Mayor Michael Bloomberg, who has been the parade’s grand marshal in the past.

This year, parade organizers made a concerted effort to mobilize the Israeli community living in New York, Miller said.

“This is a day to celebrate Israel, to be proud of our Jewish heritage and our State of Israel,” he said.

A small group of protesters, some bearing signs declaring “Israel is a racist state,” gathered behind police barricades at the start of the parade. But they were eclipsed by the vast majority of supporters participating in the peaceful event.

“It is amazing to see that everyone’s supporting Israel,” said Aviva Schur, 17, who marched with her friend Zahava Taub, also 17. “Even though there are so few Jews in the world, they come here.”

The girls were marching with an anti-poverty group, the Metropolitan Council on Jewish Poverty.

“It was awesome,” said Taub, at the end of the parade route. “You wave at everyone and its cool because they wave back.”
Posted by GS Don Morris, Ph.D./Chana Givon at 7:36 AM