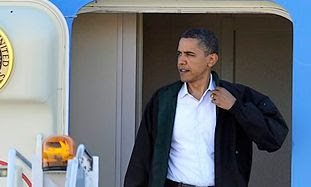 US President Barack Obama on Saturday welcomed the “balanced” nuclear non-proliferation accord reached Friday at a UN conference but criticized the singling out of Israel in the document.

Obama said the document "includes balanced and practical steps that will advance non-proliferation, nuclear disarmament, and peaceful uses of nuclear energy, which are critical pillars of the global non-proliferation regime." But, he said, “we strongly oppose efforts to single out Israel, and will oppose actions that jeopardize Israel's national security."

The UN on Friday called on Israel to become a member of the Nuclear Non Proliferation Treaty (NPT) and to allow inspection of its nuclear sites.

The 189 member nations of the NPT adopted a detailed plan of steps toward nuclear disarmament, including a sharply debated proposal to move toward banning the doomsday arms from the Middle East.

"The United States has long supported such a zone,” Obama said Saturday, “although our view is that a comprehensive and durable peace in the region and full compliance by all regional states with their arms control and nonproliferation obligations are essential precursors for its establishment."

The 28-page Final Declaration was approved by consensus on the last day of the month-long conference, convened every five years to review and advance the objectives of the 40-year-old NPT.

Under its action plan, the five recognized nuclear-weapon states — the United States, Russia, Britain, France and China — commit to speed up arms reductions, take other steps to diminish the importance of atomic weapons, and report back on progress by 2014.

The final document also calls for convening a conference in 2012 "on the establishment of a Middle East zone free of nuclear weapons and all other weapons of mass destruction." This Arab idea of a WMD-free zone is designed to pressure Israel to give up its undeclared nuclear arsenal.

The conference is convened every five years to review and advance the objectives of the 40-year-old NPT, under which nations without nuclear weapons committed not to acquire them; those with them committed to move toward their elimination; and all endorsed everyone's right to develop peaceful nuclear energy.

For the first time at an NPT review, the final declaration laid out complex action plans for all three of the treaty's "pillars" — nonproliferation, disarmament and peaceful nuclear energy.

The five weapons states committed to "accelerate concrete progress" toward reducing their atomic weaponry, and to report on progress in 2014 in preparation for the 2015 NPT review session. The document calls on them also to reduce the role of nuclear arms in their military doctrines.

The disarmament action plan inevitably leaves a major gap, since it doesn't obligate four nations that are not members of the treaty — India, Pakistan, Israel and North Korea, all of which have or are suspected of having nuclear arsenals.

On the Middle East, Arab states and Israel's allies had been at odds over wording in the plan to turn the region into a nuclear weapons-free zone. The Arab idea of a WMD-free zone, meant to pressure Israel to give up its undeclared nuclear arsenal, was endorsed by the 1995 NPT conference but never acted on.

A sticking point had been a passage naming Israel, reaffirming "the importance of Israel's accession to the NPT," a move that would require it to destroy its estimated 80 or so nuclear warheads.

Iran demanded that this NPT session insist Israel join the treaty before a 2012 conference. Egypt's UN Ambassador Maged Abdelaziz told reporters the Arab position was softer — that Israel's accession to the treaty would come as "part of the process" begun in 2012.

In the end, the singling out of Israel remained in the text, and US Undersecretary of State Ellen Tauscher said that would "seriously jeopardize" US efforts to persuade the Israelis to attend 2012 talks.
Posted by GS Don Morris, Ph.D./Chana Givon at 8:52 AM