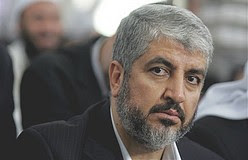 Damascus-based Hamas leader Khaled Mashaal visiting Sudan on Wednesday said that his group produces and smuggles weapons despite the blockade imposed by Israel on the Gaza Strip. "Your brothers in Palestine, despite the blockade and the closing of border passages ... despite the fleets from east and west, despite all of this, we buy arms, we manage to produce arms and we smuggle arms," AFP quoted Masshal as saying in a recording of a speech to young members of Sudan's ruling party.

According to the report, Mashaal, who arrived in Khartoum on Tuesday, did not elaborate on the type of arms produced or the suppliers of weapons.

In May, foreign media outlets reported an Israeli air strike in January on a convoy of trucks in Sudan, which was carrying weapons bound for Gaza.

American news station ABC reported at the time that the airstrike that destroyed the trucks and killed at least 39 people was not an isolated incident, but was rather one of at least three attacks. According to the report, a US official told the station that two of the strikes took place in the Sudan, while a third occurred in the Red Sea.

Israel has yet to offer an official response to the allegations.
Posted by GS Don Morris, Ph.D./Chana Givon at 6:44 AM