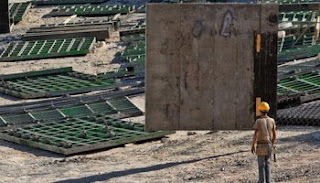 The latest threat to Middle East peace is not a rocket from Gaza or a terrorist bombing. It is a Jerusalem apartment project -- at least that's the view in Foggy Bottom. Last week, the State Department delivered a demarche to Israel's ambassador to the United States, Michael Oren, to halt construction on 20 residential units on the site of the Shepherd Hotel, which stands on the edge of an Arab neighborhood in East Jerusalem.

The State Department's fit over these 20 new units contrasts with the official silence of the United States on the vast number of Palestinian dwellings being constructed illegally in Jerusalem. According to the 2003 book, "Illegal Construction in Jerusalem" by Justus Reid Weiner, a senior Palestinian official boasted that they built 6,000 homes without permits in four years. Some of these homes have been funded by some foreign sources with little interest in promoting peace.

On Sunday, Shin Bet chief Yuval Diskin revealed that Qatar-based Sheikh Yousuf Qaradawi gave $21 million to a charity funded by Hamas to buy land and build houses in Jerusalem. Mr. Qaradawi is an Egyptian and longtime Hamas supporter who believes that suicide terror attacks are "evidence of God's justice." In a Jan. 9, 2009, sermon that aired on al Jazeera, he said, "Oh Allah, take this oppressive, Jewish, Zionist band of people. Oh Allah, do not spare a single one of them. Oh Allah, count their numbers, and kill them, down to the very last one."

Palestinian Authority President Mahmoud Abbas added his voice to the dispute yesterday, claiming that, "the holy city is today facing real dangers, while there are attempts to turn it into a full Jewish city by changing its Islamic and Christian landmarks." Mr. Abbas should study more history. Jerusalem is more open and religiously free under Israel's administration than it has ever been before. The holy sites of all faiths are protected equally under the law, which was not the case before the city was unified 40 years ago. Arab troops turned the Jewish Quarter in East Jerusalem into a "graveyard" when they invaded in 1948, according to Arab Legion commander Abdallah el-Tal.

This latest dispute comes on the heels of Secretary of State Hillary Rodham Clinton's admonition that "natural growth" -- her euphemism for Jewish babies -- was not to be permitted on the West Bank. But there was no official word on the reproductive rights of Palestinians in Israel. This lopsided approach to the peace process has generated deep suspicion among Israelis. A poll published last month in the Jerusalem Post showed that only 6 percent of Israelis believe that President Obama's policies are pro-Israel, while 50 percent believe they are pro-Palestinian.

Last week, Mr. Obama convened a meeting of prominent Jewish-American leaders to assure them that he is a friend of Israel. But as the saying goes, with friends like these. . . .
Posted by GS Don Morris, Ph.D./Chana Givon at 4:03 PM