Dore Gold: J'lem sovereignty obviously not up for discussion 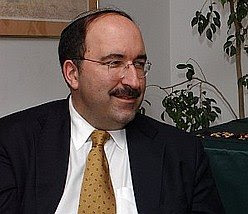 Amid tensions with the US over east Jerusalem construction, former Israeli ambassador to Washington Dore Gold said Friday that "Israel's sovereignty of the Old City and the rest of Jerusalem is obviously not up for discussion." "Our hope is that we can lower tensions between Israel and the US created by headlines and various comments," he said in an interview with Israel Radio.

Gold, one of Prime Minister Binyamin Netanyahu's top foreign policy advisers, said there were currently important joint interests between Jerusalem and Washington, particularly the Iranian threat, and also stressed the importance of pursuing partnerships with Arab countries that felt threatened by the Islamic republic's nuclear aspirations.

"We don't know if Syria has decided to leave the terror axis," he said. "Syria doesn't only give refuge to Hamas and Hizbullah, but for many years, it has also given support to Al-Qaida-linked groups in Iraq acting against US and British forces."

"I believe the Golan is Israel's line of defense in the North and must be preserved," he added.

Gold emphasized that he was speaking in his own name, not that of the government.

More on this at Dore Gold's website at www.jcpa.org