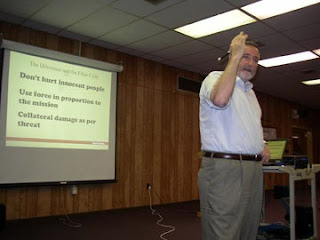 Imagine you are a soldier in the field when a suspected suicide bomber comes at you. Should you shoot or not? “Eight seconds — that’s all you have to decide,” said Col. Bentzi Gruber, a reserve vice commander in the Israel Defense Forces.

“They do this because they know we won’t shoot,” said Gruber, who oversees 20,000 soldiers. “We won’t do it. A Palestinian kid and a Jewish kid are the same thing to me.”

In a program that was both a personal account and an overview of Israeli military ethics, Gruber outlined how the IDF strives to minimize civilian casualties even in the middle of war.

The program was sponsored by the Orthodox Union’s Jewish Learning Initiatives on Campus and cosponsored by Rutgers Hillel.

“Tonight’s topic is very important for everyone to hear,” said student coordinator Avi Gilboa, a junior engineering major from Tenafly. “Bentzi did a good job of explaining the facts of what’s really happening in the field. We opened this up to the entire college because we felt it was something everyone should hear.”

With more than 20 years in the reserves, Gruber has been given permission to present materials and information usually seen only by military or government officials.

A computer engineer in civilian life, he said his own ethics stem from learning from his Holocaust survivor mother to have respect for all human beings.

Gruber also runs hesed-in-the-field programs, bringing together IDF soldiers and the seriously ill and the mentally and physically disabled for special events, including taking them along on maneuvers.

As Gruber showed the footage, in some instances bullets could be heard in the background. Aerial footage showed terrorists moving under cover of night.

“Force is used in proportion to the mission,” said Gruber. “We always try not to do much damage.”

If a pilot spots a terrorist in a taxi with four children, he said, “we won’t shoot even if this terrorist killed 10 people yesterday and four soldiers today. We will wait and find him another day.”
‘This is war’

Gruber used footage of a man with a rocket launcher on a crowded street as another example of a non-shooting situation because of the potential danger to innocent civilians.

These policies have held down collateral damage to civilians to rates far below that of U.S. forces in Iraqi hotspots like Fallujah, according to Gruber.

“If Tijuana started to launch rockets into Los Angeles, how long do you think it would take the U.S. Army to respond — three days, three months, three years? How about three seconds?”

By contrast, Israel suffered more than three years of missile attacks in the south before launching the Gaza initiative.

Before Israel bombs neighborhoods, Gruber said, residents are given warnings to leave their homes via leaflets dropped days in advance. As he showed a film of a call center, he pointed out one caller contacting Palestinians to warn them bombing was imminent. Text messages are also sent to cell phones.

“No other country would do the same,” said Gruber.

Palestinians also use ambulances, schools, mosques, and homes to hide caches of weapons and launch rockets and as hiding places for fighters, he said.

While Gruber said he would never give an order to shoot at an ambulance — “I don’t know; maybe there’s a pregnant woman in there” — a mosque or school can become a legitimate target.

He showed film of terrorists climbing into an ambulance as he instructed the audience to count with him. He stopped the film as the seventh armed man climbed in.

There were 295 noncombatants killed in the Gaza offensive — including 89 under age 16 and 50 women; Gruber acknowledged, “For me, every one of these is a tragedy.”

“But you have to understand: This is war,” he added. “But for me it is a tragedy even to kill an enemy.”
Posted by GS Don Morris, Ph.D./Chana Givon at 7:26 PM