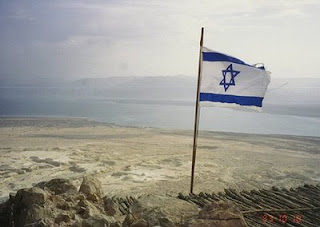 You've heard it all before, as the prime rationale for a Palestinian state by the left..if those stubborn Joos don't knuckle under and give the Palestinians everything they want, the Arabs will soon be a majority. And then the only choices the Jews will have left is to be a minority in their own country or to give up democracy in favor of minority rule.

I've discussed what absolute horse manure this is many times, but it might be helpful to share the latest real numbers for those who still need convincing: Israel's population on the eve of its 61st Independence Day numbers 7,411,000, according to data released by the Central Bureau of Statistics Monday afternoon.

Let's look at this more closely. Two things the article doesn't mention. One, out of the 806,000 population mentioned in 1948, almost the exact same percentage, around 20%, were Arab, and that ratio has remained constant throught Israel's history. So much for the rapidly expanding Arab population. Second, the term 'Arab' does not mesh in the least with 'Palestinian.'

That Arab population includes not only Arabs with residence permits who are not Israeli citizens, but Druse, Circassians and Bedouins, who proudly serve in the IDF and do not regard the Quraysh Palestinians fondly, to say the least.

Another factor is increased Arab emigration and the Palestinian's constant inflation of the Arab numbers. They've got plenaty of motivation to do so, as Yakov Faitelson points in in his recounting of various bogus population estimates:

(I'll say! When the Saudis demanded an audit before they would provide aid to the Palestinian Authority, they found over 37,000 'no-show jobs' - non-existant people who were nevertheless drawing paychecks from UNRWA and other idiot Western donors.)

Careful demographic analysis, however, should lead to a conclusion in stark contrast to the demographic time bomb thesis. The natural increase of the Jewish population in Israel—that is, its yearly birth rate less its yearly death rate—stabilized thirty years ago and, since 2002, has even begun to grow. The natural increase of the total Arab population, comprising both Israeli Arabs and the Arabs of the West Bank and Gaza, continues to descend toward convergence with the Jewish population, probably in the latter half of this century.

The data, moreover, point to rising levels of Arab emigration, particularly among young people. According to the survey conducted by Bir-Zeit University, 32 percent of all Palestinians and 44 percent of Palestinian youth would emigrate if they could.[48] The official Palestinian newspaper Al-Hayat al-Jadida has reported similar numbers.[49] A public opinion poll conducted by the Near East Consulting Corporation in the Gaza Strip reveals an even higher rate—47 percent of all Palestinians in the Gaza Strip. [50] Translated into numbers of people, as of 2006, more than a million Arabs in the Palestinian territories wish to emigrate. As journalist Amit Cohen noted in 2007, "Close to 14,000 Palestinians, more than 1 percent of the population in the Strip, have left the Gaza Strip since the implementation of the withdrawal program,[51] largely for financial reasons.[52]

In an interview reported in the pan-Arab daily Asharq al-Awsat around the same time, Salam Fayyad, head of the Emergency Palestinian Government, commented: "How will we be able to deal with the problem of 40,000 to 50,000 Palestinians who have emigrated and many more that are not emigrating just because they do not have the means? We are losing in this respect."[53]

The misuse of demography has been one of the most prominent, yet unexamined, aspects of the Israeli-Palestinian conflict. Many Israelis have so thoroughly absorbed the repeated claims of a diminishing Jewish majority that they do not consider whether their conventional wisdom is false. Before an accurate demographic picture of Israel and the Palestinian territories trickles down to the consciousness of the residents of the region, it must first be understood by Israeli and Palestinian policymakers, academics, and journalists, who need accurate, factual information to do their jobs. The impact on the conflict of such a development would be substantial.

Moreover, the Jewish birthrate in Judea and Samaria ( AKA the West Bank) which includes a high percentage of religious Jews is almost equal to the Palestinian birth rate in terms of births per woman.If you factor out Gaza, it amounts to a 67% Jewish majority in 98.5% of the land west of the Jordan River. And that's without factoring in the 'fudge' factor from the Palestinian Authority.

Or, as Yasir Arafat once said, "I've killed for my cause..don't you think I would lie for it?"
Posted by GS Don Morris, Ph.D./Chana Givon at 4:38 PM