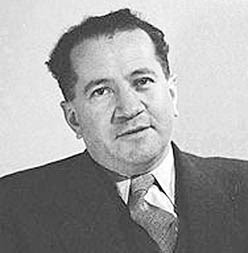 One of the best books anywhere about the lead-up to Israel's independence is perhaps the most unlikely, least attractive and inordinately trivia-laden little volume imaginable. It was composed by a man considered to have been one of old Mapai's particularly lackluster functionary figures - Ze'ev Sherf.

The pinnacle of his career was his brief elevation the post of finance minister in 1968. In actual fact, however, his greater distinction was to have served as Israel's first-ever cabinet secretary, a position that grew out of his appointment in December 1947 to head the committee charged with all practical preparations for Israel's declaration of independence and with the establishment of a working administration ready to take over authority as soon as the British mandatory forces depart.

Sherf in effect was the state's bureaucratic midwife, carrying out the unheroic but indispensable tasks that are later forgotten and taken for granted. As such, Sherf possessed an accumulation of seemingly tedious incidental material, the sort which is really the most telling and vital of all.

In 1959 he collected these esoteric minutiae into a thin hardcover entitled Three Days. It listed in extraordinary detail every move in the three days that preceded independence and its culmination was the actual declaration at the tiny Tel Aviv Museum auditorium in what previously was the home of the city's first mayor, Meir Dizengoff, on 16 Sderot Rothschild.

The venue was no one's top choice.

Jerusalem was besieged, while Tel Aviv's Habima Theater was ruled out precisely because it was bigger and could accommodate more participants. Even a marginally larger affair was reckoned undesirable for fear that publicity about when and where the Jewish state's birth is slated to be announced would invite Egyptian air-strikes. It was, therefore, thought advisable to keep everything hush-hush, make do with fewer honorary guests and cram them all into a minuscule hall (although the secrecy was quickly breached anyhow, in keeping with local proclivities).

The invitation (including a request to keep it confidential) was mimeographed and sent unsigned. The declaration itself was placed for safekeeping in a bank's basement vault, lest it be destroyed by enemy bombardments.

Only one-hour before the ceremony, was its final wording at last approved - after nit-picking objections over every syllable and turn of phrase.

A laborious version authored by Moshe Sharett was roundly rejected and the debates continued until David Ben-Gurion took the text home, trimmed, honed and rewrote everything himself. He accepted Bechor Sheetrit's proposal to commence the declaration by noting that it was in Eretz Yisrael that the Jewish nation was born.

Caught between religious delegates who demanded mention of the Almighty and Marxists who'd hear nothing of the sort, Ben-Gurion's compromise was to affirm "our trust in the Rock of Israel."

Contrary to popular misconceptions, the declaration never features the word "democracy" and only cursorily lists freedoms "in the light of the vision of the prophets of Israel."

Considering the meticulous attention to every nuance, this omission was no accident. Ben-Gurion repeatedly argued that "this declaration is no constitution," and that the terse reference to civil liberties was required by the General Assembly Partition Resolution.

"We inserted the basic elements demanded of us by the UN," he explained to members of the Provisional People's Council (the embryonic parliament).

Ben-Gurion also decreed that the new state's borders would remain unspecified. Again he reiterated that "this is a declaration of independence. The Americans declared independence without stipulating to which territory it would apply."

"Suppose," Ben-Gurion conjectured, "the Arabs launch a war against us. If we then foil their plans to destroy us and, for instance, capture the western Galilee and the road to Jerusalem, these then would become part of the state -assuming our strength suffices. Why should we obligate ourselves not to hold on to what the enemy forces us to fight for?"

Ben-Gurion's far-sightedness was gutsy. Bloody battles already raged and Gush Etzion fell just when the secretary who typed the declaration (the parchment-like scroll was inscribed after the event) rushed down (on her own initiative) to the nearest neighborhood stationary store to buy blue paper with which to wrap the pages, to "dress them up."

The newborn state possessed no resources or military hardware. Its population of 600,000 also comprised the old, the infirm and the very young. The risk was enormous but the spirit and grit no less colossal.

How different Israel is 61 years on. Its population has multiplied more than ten-fold and its military power exceeds anything Ben-Gurion could rationally have dreamed of.

Sherf, whose documentation no one will bother to air out on the state's birthday, recounted that at 4 o'clock on the fateful Friday afternoon 61 years ago "no foreign flags were lowered, our national banners weren't hoisted, celebratory shots weren't fired, the army didn't march, speeches weren't delivered.in barely 32 minutes was declared the liberty of the nation subjugated for 1887 years."

Following Ben-Gurion's proclamation, Hatikva was played by the orchestra in the building's upper story (there wasn't room below) "and as the sounds descended from above, it was as if the heavens had opened up. Everyone stood silent, motionless and listened to the wondrous hymn, emanating from an unseen place."
This article can also be read at http://www.jpost.com /servlet/Satellite?cid=1239710808000&pagename=JPArticle%2FShowFull
Posted by GS Don Morris, Ph.D./Chana Givon at 4:16 PM