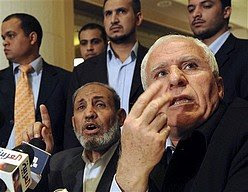 It's getting crowded under that bus where President Obama throws the discards no longer useful to him. Fortunately, the Rev. Jeremiah Wright is there to offer the last rites, this time for Charles W. Freeman Jr., may peace be on him.

Mr. Freeman is the well-paid shill for the Saudis and the Chinese who was stopped just before he was to assume the chairmanship of the National Intelligence Council, where he would have directed the preparation of intelligence briefings for the president and other high government officials - an official largely responsible for what the president should know and when he should know it. The appointment does not require Senate endorsement and the White House apparently figured it could slip him past whoever was not looking. Mr. Freeman, to put a fine point on it, does not like the Israelis very much. He comes out of the State Department, where bagels and lox are not a big breakfast favorite in the cafeteria, and was once a medium-high official at Foggy Bottom, a "principal deputy assistant secretary" to somebody who rides to the office in one of the longer limousines. (The State Department is fond of titles too long to fit on a calling card.) Mr. Freeman doesn't like anybody who makes trouble for China very much, either, particularly if they're demonstrating for democracy at Tiananmen Square or Tibetans struggling to get their country back.

Fortunately, it occurred to a few key Republicans and several Democrats that he was a very odd choice for the job. The Republicans were mostly Christians, the Democrats were mostly Jewish, and it's a shame this is important but Mr. Freeman's friends on the left are trying to make this a religious issue. It's time to blame the Jews again, this time for ruining poor Mr. Freeman's new career as the chef in charge of cooking the intelligence served in the Oval Office.

Mr. Freeman has had a long if not distinguished career in berating the Israelis for struggling for survival and apologizing for Chinese repression of dissidents struggling only to breathe free. In a speech in 2005 he described Israel as the aggressor in the Middle East, and two years later accused the United States of "embracing Israel's enemies as our own." He apparently "forgot" that Israel's enemies had on terrible occasion made themselves enemies of the United States, with their suicide-bomber attacks on targets in the Middle East and finally on the Twin Towers on September 11. But blame the Jews, anyway.

When Mr. Freeman surrendered to the inevitable and withdrew his name from consideration he distributed a two-page rant casting himself as a martyr to Jewish perfidy and treachery, done in by a Jewish lobby whose "tactics plumb the depths of dishonor and decency." These Jews are "intent on enforcing adherence to the policies of a foreign government."

Blaming "lobbyists," whether Jewish, Catholic or Presbyterian, is an odd excuse for Mr. Freeman, who is himself a lobbyist. He runs a think tank, the Middle East Policy Council, with money supplied by Saudi Arabia, which he lovingly describes as a kingdom ruled by the beneficent "Abdullah the Great," and serves on the board of a Chinese government-owned oil company. He may regard his description of Chinese repression of Tibetan demonstrators as a "race riot" as noble advocacy, but anyone else can recognize it as lobbying. (Not that there's anything wrong with that.)

Mr. Freeman has his defenders. Nearly all on the left, naturally. The Nation magazine decries "a thunderous coordinated assault" on him; David T. Ellwood, the dean of the Kennedy School of Government at Harvard and author of an earlier screed against "the Israeli lobby," called the citations (all accurate) of Mr. Freeman's work "a despicable smear campaign" for "some rather mild public criticisms of Israeli policy." Mr. Freeman's critics, the professor says, intended to force him out of the job. Hmmmmm. Well, yes, that was the idea.

What really bugs Mr. Freeman and his friends is that he was recognized for who he is. "I think their goal is not to stop me but to keep others from speaking out," he said on the way out, just as the door was about to bang him on the butt. Nobody has tried to shut up Mr. Freeman, his defenders or his detractors; it's the public noise, the noise that the elites no longer control, that did him in.

The more disturbing question is why the White House agreed to this appointment in the first place. Not all of Israel's enemies live in the Middle East. Some of them live just down the street.