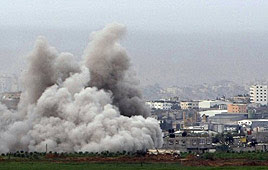 The chief prosecutor of the Hague-based International Criminal Court (ICC) announced he may launch an investigation into alleged Israeli war crimes committed during its recent military offensive in Gaza.

"We are in the analysis phase. I have not yet decided whether we will launch an investigation, but it is a possibility," Luis Moreno-Ocampo told the Argentinean newspaper Perfil, just a few days after the ICC issued an international arrest warrant against Sudanese president Omar el-Bashir, accused of committing war crimes and crimes against humanity in Darfur.


In the interview, published Sunday, Moreno-Ocampo said he was examining complaints filed by Palestinian Justice Minister Ali Kashan in January according to which Israel used incendiary white phosphorus shells in crowded civilian areas in Gaza, contrary to international law.


According to the ICC prosecutor, Amnesty International and the Arab League had also presented his office with documentation related to Israel's alleged illegal activities in the Hamas-ruled territory.


Moreno-Ocampo initially dismissed the Palestinians' appeals to the ICC, saying he could not build a case against Israel as it is not a signatory of the Treaty of Rome. However, he said he was reexamining the possibility of launching an investigation against Israel after the Palestinian Authority submitted documents it said proved Palestine was a legal state with the right to request such a probe.


The Rome Statute that created the ICC determines that only a state could accept the court's jurisdiction for such an investigation to be launched.