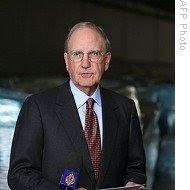 The Obama administration is moving quickly to overhaul American policy on the Middle East, sending top envoys to the region and promising to push hard for a two-state solution to the Israeli-Palestinian conflict. Some regional analysts warn conditions on the ground may make progress especially difficult. U.S. President Barack Obama has been in office less than two months. During that brief period, however, he has already dispatched Secretary of State Hillary Clinton, special envoy George Mitchell, and other diplomats from the State Department and White House to the Middle East.

Mr. Obama says his administration will engage "vigorously and consistently" in order to achieve genuine progress, although he has cautioned that breakthroughs are not likely to occur overnight.

Congressional delegations have also been visiting Israel and the Palestinian territories, including one led by the chairman of the Senate Foreign Relations Committee, John Kerry.

"We all know exactly what it is going to take, two states, living side-by-side, in peace and security," he said.

Critics say former President Bush was too focused on the war in Iraq, and failed to pay enough attention to other nations and issues in the region until his final year in office.

Senator Kerry says Mr. Obama's election presents what he calls an extraordinary chance to signal a new regional approach to the Middle East.

"To start with we need to fundamentally re-conceptualize the Israeli-Palestinian conflict as a regional problem that demands a regional solution. The challenges that we face there - Iran, Iraq, Syria, Lebanon and the Middle East peace process - form an interconnected web that requires an integrated approach," he said.

The Obama administration has decided to engage Syria, even though U.S. officials have criticized the country for supporting militant groups like Hamas and Hezbollah.

Robert Malley, the Middle East program director at the International Crisis Group, says regional progress should be the focus of the Obama administration.

"If I were advising the administration I would say you could work on the margins - Palestinian reconciliation, reaching out to Syria, restarting Syrian-Israeli negotiations, reaching out to Iran. I think by changing that landscape you may do more to help move towards a solution to the Israeli-Palestinian conflict than by focusing on a two-state solution right now," he said.

Malley says current realities on the ground diminish hopes of quick progress on the Israeli-Palestinian conflict.

It is not clear whether Egyptian-backed negotiations can unite the Palestinian leadership.

In other developments, President Obama has announced the timetable for withdrawal of American combat forces in Iraq.

On Iran, Mr. Obama has decided to open the door to the possibility of direct engagement with Tehran.

Senator Kerry says there has been a tectonic shift in the geopolitics of the Middle East.Kerry says the rise of Iran following the war in Iraq has created an unprecedented willingness among moderate Arab nations to work with Israel.

"So there is a new reality - moderate Arab countries and Israel alike are actually more worried together about Iran than they are about each other. As a result, they are now cooperating in ways that were unimaginable just a couple of years ago. The truth is that an international initiative to prevent Iran from acquiring a nuclear weapon is an essential building block of stability in the Middle East. If we succeed, Arab moderates will be stronger and Israel will be much more likely to take the risks for peace," he said.

Al-Omari says the Obama administration itself is the most important component of the evolving situation in the Middle East.

"The really new element, which I think is most important, is the issue of the Obama administration. I think that the honeymoon, the kind of impact that the Obama administration brings in, the honeymoon is still there. I think we have an opening right now to shape policy. And I think there is a hunger in the region for an active American role, an active American engagement," he said.

President Obama is scheduled to travel next month to Turkey, which has played a key role in Middle East peace efforts because of its ties to Arab states and Israel.