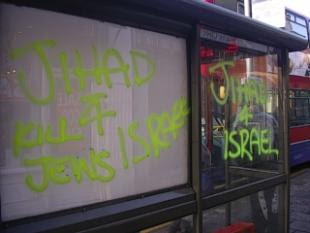 London - The Jewish community in Golders Green has been the target of further anti-Semitic attacks, in the form of more offensive graffiti.

Graffiti reading "Kill the filthy Jews" was daubed on walls and pavements near Golders Green tube station and vandals wrote "Jihad 4 Israel" on top of Holocaust Memorial Day adverts. Golders Green residents have unanimously condemned the ongoing hate crimes, which have risen up in the wake of the Gaza conflict.

"The graffiti is revolting," said one woman from Hampstead Way. "The conflict in Gaza is awful but people here have nothing to do with it. I want to call the police - this has to be reported. But what can you do when you are dealing with fanatics?"

Gabriella Lauffer, 22, from Golders Green, said: "The graffiti just comes down to anti-Semitism. Gaza is an excuse for anti-Semites to attack Jews."

Joseph Haziza, 27, manager of Menachem Kosher butchers which is next to Sinclair Grove on Golders Green road, said: "In this area of Golders Green the graffiti hasn't been as bad. Further up the Golders Green Road they have been affected, with Muslims coming into Jewish shops and saying: 'I'm going to kill you'.

"I don't wear my cuple [skull cap] when I'm out and about. I don't want to be started on."

Barnet police tried to reassure the community. A spokesman said: "We have a policy that once incidents such as these are reported we clean it up within 24 hours. There are an increased number of graffiti incidents and we have a team in place to respond as quickly as possible."

And a spokesman for the Community Security Trust, which works to safeguard Jewish communities in the UK, said: "CST has been notified of well over 150 anti-Semitic incidents throughout Britain, by far the worst wave of anti-Semitism in recent decades.

"Barnet is of course home to one of Britain's largest, most visible and most vibrant Jewish communities and therefore many of the anti-Semitic attacks reported to CST have occurred in the neighbourhood.

"The reaction from council and police has been largely excellent, and together we are all determined to ensure that the Jewish community in Barnet is able to conduct its lawful way of life."

Anyone with information should call Barnet Police on 0300 123 1212 or Crimestoppers anonymously on 0800 555111. London - More Anti-Semitic Attacks in Golders Green

You can view this article online at VosIzNeias.com/26119
Posted by GS Don Morris, Ph.D./Chana Givon at 5:01 PM