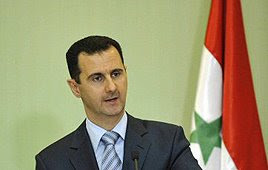 According to a report by Syrian news agency Sana, Mashaal told Assad that "Syria is a partner in the victory achieved by the Palestinian people." The Syrian leader stressed that Israel failed in securing its objectives during Operation Cast Lead, which he characterized as "the violent activity in Gaza," even though the IDF used the most lethal weapons.


According to Assad, the achievements in Gaza attest to the Palestinian people's commitment to their inalienable rights.


"This also served as proof of the Palestinians' deep faith in their victory over occupation and aggression," he said.


Members of the Hamas delegation expressed their appreciation to the Syrian leader and to the Syrian people for the support offered to the Palestinian struggle during the fighting in the Gaza Strip. They added that they intend to tour several countries in order to express their gratitude to their supporters, noting that Syria was the first country on the tour.


A statement issued by Hamas said the tour aims to express the group's appreciation to states that "stood by the Palestinian people during the criminal Zionist aggression in the Gaza Strip.