Jews are the enemies of Allah 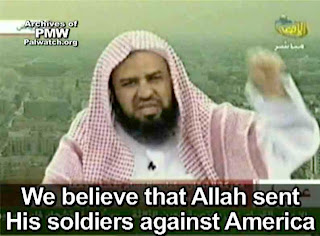 "Jews are the enemies of Allah," and therefore by definition are the enemies of all Muslims. This opinion is expressed by Dr. Walid Al-Rashudi, head of the Department of Islamic Studies at Saud University in Saudi Arabia, in a speech broadcast last week on Hamas TV. The religious scholar also prays for the extermination of all Jews: "Kill them one by one and don't leave even one." Hamas leaders have expressed on numerous occasions the belief that all Jews should be exterminated. (Click to see PMW bulletin.)

The religious scholar likewise expresses rage at the Muslim countries who are allied with the West, calling them "traitors...
who believe in America," instead of in Allah.

Palestinians from both Hamas and Fatah, along with much of the Islamic world, present the Arab conflict with Israel as a conflict of Islam against Jews, completely rejecting the territorial aspect and calling it a religious conflict. Many also define the conflict in a broader perspective - as a global religious conflict between Muslims and non-Muslim countries - and condemn as traitors moderate Arab countries that ally with America.

The following are statements from Dr. Walid Al-Rashudi's speech:

"Oh Allah, inflict as many losses as possible on the Jews, kill them one by one and don't leave even one."