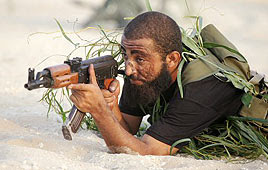 Popular Resistance Committees spokesman says group plans to kidnap female soldier should IDF enter Gaza, so that 'Gilad Shalit will be able to start family'; Gaza groups have more than 10,000 rockets, 'can drop martyrs from sky into Tel Aviv,' he says

Palestinian threats: An Israeli invasion of Gaza would draw a harsh Palestinian response, including the kidnapping of more Israeli soldiers, a spokesman for the Popular Resistance Committees warned Friday. Specifically, the group would aim to kidnap a female soldier, the PRC's Abu Abir told the Nazareth-based Arb al-Dahel.


"The resistance movement is talking about the abduction of a female soldier, and we're certain we'll succeed," he said. "Then, Gilad Shalit will be able to start a family, and the negotiations will be for the release of the Shalit family."


Abu Abir also hinted that the abducted Israeli soldier was not held in the Gaza Strip.


"Even if Israel thinks about entering Gaza, or dropping an atomic bomb that would wipe out Gaza, it won't be able to kill Gilad Shalit," he said.


"Ehud Barak won't dare attack," the spokesman told the newspaper, addressing the possibly of an Israeli strike. "He and the Shin Bet know what awaits them in Gaza. Should the IDF attack, Israel won't be able to sustain the Palestinian response even for a day. Any entry into Gaza would prompt the abduction of soldiers – either alive or dead."


When asked whether Palestinian groups possess missiles that can hit Tel Aviv, the PRC spokesman said: "We have more than 10,000 missiles. Some of them are Russian-made, and others are anti-aircraft missiles…We have the ability to neutralize Israel's tanks, and we can also drop martyrs from the sky into Tel Aviv and its suburbs."


"We have missiles with a range of more than 40 kilometers," he added. "It isn't our custom to say what we possess; we'll only do it after we rain the missiles down on the target. All cities within the occupied Palestine are included in the resistance movement's plans."
Posted by GS Don Morris, Ph.D./Chana Givon at 3:29 AM