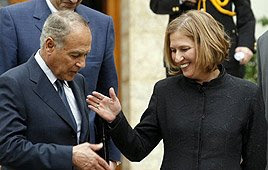 FM Livni speaks to counterparts, as well as to representatives in the EU and the United Nations, emphasizes necessity of Israel reaction to unceasing, civilian-targeted rocket fire from Hamas-controlled territory

The opening of the Gaza crossings Friday morning and the expected transfer of 40 trucks full of food and humanitarian supplies appears to be a tactical decision. Israeli sources say that the move's objective is to allow the Gaza community to stock up on basic necessities, and thus mitigate the situation in the eyes of the international community, in the event that the IDF will need to undertake a military operation in the coastal enclave. Prime Minister Ehud Olmert will hold a series of meetings Sunday with Defense Minister Ehud Barak and Foreign Minister Tzipi Livni (called the kitchen cabinet) to discuss the option of a potential Gaza operation.


One topic of these meetings will be the homefront's state of readiness and Israel's ability to improve it in the days leading up to a military operation in Gaza. Another meeting will deal with political measures that the Foreign Ministry must achieve in the international community.


Israel has already made a move in this last category over the past few days across the United States, Europe and even in Arab countries, in order to at least to communicate the country's side of the conflict.


Livni herself spoke with her counterparts in many of these countries, as well as to representatives in the United Nations and European Union, emphasizing the necessity of a reaction by Israel to unceasing, civilian-targeted rocket fire from the Gaza Strip in the past week.


'Israel will need to use all its force'

Many of the foreign representatives expressed concern for the humanitarian considerations in Gaza, in the wake of a potential Israeli operation, and this is what the kitchen cabinet's third meeting will deal with.


Foreign Ministry efforts to plead Israel's case will are expected to continue next week.

Livni met with Egyptian President Hosni Mubarak in Cairo on Thursday to discuss the developments in Gaza. Upon her return the foreign minister said "Israel cannot accept the situation in the Strip and must protect its citizens.

"Israel wants to live in peace with its neighbors, but we cannot accept the fact that an extremist terror organization is trying to dictate our domestic situation while seeking better terms for a ceasefire that it has violated," she said. "Israel will not be able to restrain itself for much longer.

An official in Jerusalem said "if and when we do launch an operation, we must be prepared to deal with all of its aspects. As it appears now, the international community is calling for Israeli restraint, but it also understands that the current situation is intolerable and that Israel has no other option but to respond militarily to the ongoing rocket fire by Hamas gunmen on our innocent civilians."

On Thursday evening a Qassam fired from Gaza landed in an open area near Ashkelon's southern industrial zone; there were no reports of injuries or damage. In all, six rockets and more than 10 mortars were launched toward Israel throughout the day.

IDF Chief of Staff Lt.-Gen. Gabi Ashkenazi said Thursday regarding the situation in the South that "Israel will need to use all its force in order to damage terror infrastructure and create a different and safe reality in the Gaza vicinity."

Despite the rocket fire, Barak announced that crossings into Gaza will be opened Friday to allow for the transition of humanitarian supplies to the Palestinian residents of the area.

Barak's decision to open the crossings was based on recommendations by professionals in the defense establishment, as well as appeals from international sources.