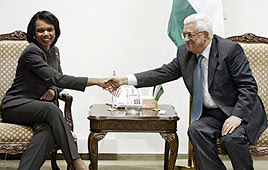 During Ramallah news conference US secretary of state says she is certain if Palestinians, Israelis stay on Bush-endorsed track peace will be achieved; Abbas says he hopes Obama administration will begin tackling Mideast issues immediately
Reuters

US Secretary of State Condoleezza Rice on Friday denied the Israeli-Palestinian peace process sponsored by US President George W. Bush was a failure, saying it should lay the ground for an eventual deal. Launched nearly a year ago at a conference in Annapolis, Maryland, the negotiations were hampered from the start by violence and bitter disputes over Jewish settlement building and the future of Jerusalem.

"We knew ... That if that agreement was not reached by the end of the year, there would be those that would say that the Annapolis process, the negotiations, had failed. In fact, it is quite the opposite," Rice told a news conference in the West Bank city of Ramallah with Palestinian President Mahmoud Abbas.


"While we may not yet be at the finish line, I am quite certain that if Palestinians and Israelis stay on the Annapolis course, they are going to cross that finish line and can do so relatively soon," she added.


The White House acknowledged for the first time on Thursday that Bush's goal of a deal on Palestinian statehood before he leaves office in January was "unlikely" to be achieved.


Abbas and Foreign Minister Tzipi Livni made public commitments to Rice to continue the negotiations, which the secretary of state insisted had narrowed the gaps between the two sides.

Barack Obama, who won the US presidential election on Tuesday, takes office on Jan. 20 but it is unclear how soon he will engage in Middle East peacemaking. Rice on Thursday said it was an "open question" how the Bush administration would hand over the matter to Obama's team.

"We hope that the new administration will begin immediately tackling the Middle East issue so we would not waste time," Abbas told reporters.


He also said he complained to Rice about continued Israeli settlement building, "incursions" into Palestinian areas and what he called a "dangerous escalation" in attacks by Jewish settlers on Palestinian farmers during the olive harvest.


US officials attributed the failure to reach an agreement this year to Israel's decision to hold an early parliamentary election, scheduled for Feb. 10.


With Abbas at her side, Rice cautioned Israel about continued building activity in Jewish settlements in the occupied West Bank, calling it damaging to peace prospects.