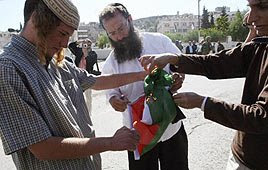 Tensions high in Hebron: Several right-wing activists have been documented Sunday burning a Palestinian flag and trampling on it, while threatening Palestinian residents in the West Bank town of Hebron The incident took place upon the beginning of a Palestinian Authority campaign aimed at "removing the siege from the heart of Hebron." The campaign aims to protest the roadblocks faced by residents within the city. Palestinians are upset that many roads are blocked to Palestinian movement and can only be used by Jewish settlers.


The Palestinians held several rallies around the city and Palestinian flags were hung on roofs, businesses, and cars. However, some settlers were apparently unimpressed with the flags: A female settler removed a flag from a fence while cursing Palestinian passersby. The woman was joined by a group of settlers headed by rightist activist Baruch Marzel, who proceeded to burn and trample on the flag, while pledging that "Palestinians will have unbearable life in Hebron."


The settlers said that whoever dares wave the Palestinian flag "will be trampled on like we trample on the flag." Palestinian eyewitnesses said police officers at the scene did not attempt to intervene or prevent Marzel from burning the flag. "We know of Palestinians who have been sent to prison for three years for burning an Israeli flag," a Palestinian activist said.


In a talk with Ynet, Marzel confirmed that he burned a Palestinian flag, and said that developments in Hebron amount to provocations staged by Palestinians and leftist anarchists.


"Since morning hours, leftist activists were walking around Hebron along with Palestinians, while carrying banned PLO flags. I wonder what would have happened if we held up Kahane flags. What is being done here is incitement against Jewish residents."


Efrat Weiss contributed to the story