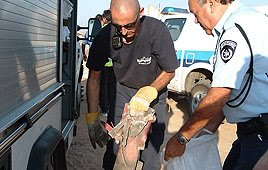 Rocket attacks go on: Palestinian terrorists fired five Qassam rockets at Gaza-region communities Friday morning. Two rockets reportedly landed in the Sderot area, while three other rockets landed in open areas in the western Negev. No injuries were reported in the rocket barrage. The al-Quds Brigades, the military wing of Islamic Jihad, claimed responsibility for the attack.

One of the rockets reportedly landed near a water reservoir at a southern kibbutz. Another rocket hit the fence of a western Negev kibbutz.

Meanwhile, the alert level in the south was raised ahead of the opening of the school day. Security chiefs at various regional communities urged parents to remain alert and boosted their patrols in the area.

In the southern city of Ashkelon, the municipal parents' association decided to postpone the opening of the school day in protest of the government's failure in handling ongoing rocket attacks on the city.


Security officials told Ynet Thursday that the next 24 hours could determine whether the Gaza Strip lull will continue. The officials said the defense establishment was preparing for any possibility.

Rocket attacks at Israel resumed this week in the wake of the IDF operation in the central Gaza Strip. The raid was meant to thwart the abduction of IDF soldiers via an underground tunnel dug by Palestinian terrorists.

Ali Waked contributed to the story
Posted by GS Don Morris, Ph.D./Chana Givon at 7:58 AM