We live side by side with a vile monster that has malicious intentions and limited abilities. 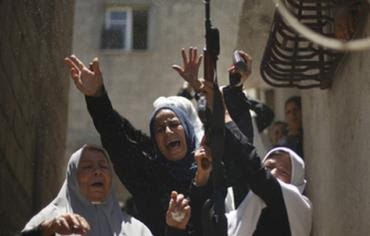 A relative of Palestinian member of Hamas' armed wing Ibraheem al-Arqan holds a weapon as others mourn during his funeral in Gaza City. Photo: REUTERS
If they were capable of doing to us what we are capable of doing to them, none of us would be here. They would annihilate us all: Left and Right, religious and secular, industrialists and farmers – each and every one of us.

We live side by side with a vile monster that has malicious intentions and limited abilities. We could slay it or chase it out, but we refrain from taking such action because of the human values we uphold. Those values are foreign to the monster next door, and it certainly doesn’t feel obliged to uphold them.

The situation is similar to keeping a baby crocodile in your home. The croc would like nothing better than to eat you, but it can’t because it’s too small. The most it can do is take a little bite here, or draw a little blood there. As the years go by, the reptile grows bigger. It still can’t eat you, but it is already a threat to children.

That’s when you have to understand a basic fact of life: you don’t live with a creature that wants to eat you.

After Ramla was captured in the War of Independence, one of the mukhtars asked an Israeli commander, “What are you going to do to us?” “We’ll do exactly what you planned to do to us,” the officer replied. The mukhtar went white. He knew very well what they would have done to the Jews if the battle had ended differently. It didn’t happen that way, of course. There are Arabs living in Ramla to this day. But it’s a good example of asymmetry.

How long will we go on playing the same game but by different rules? We have to separate from each other, and if the crocodile won’t agree to live apart from us within clear and secure borders, then we’ll have to impose that separation on it ourselves.

Just look at what’s happening around us. Throughout the region, people are dividing themselves up according to religious or tribal affiliation. Hundreds of thousands of Christians who have lived for close to 2,000 years in the north of what used to be Iraq are fleeing. The Sunnis are banding together, as are the Shi’ites, the Alawites and the Druse. The old world powers put all these groups in one bottle, like oil and water, and shook well.

Now the artificially combined components are separating out. And they’re not doing it peacefully, but via a brutal fight to the death. The appetite for dominance, the disputed areas, and the eagerness to control natural resources and strategic sites all mean that the fires will not die down quickly. Over a thousand years of hostility between Muslims of different sects has been reignited, and millions of human beings are paying the price of the holy madness.

DIVISIONS ALONG national or tribal lines have also been instituted elsewhere in the world: the Soviet Union split up into 15 states; Yugoslavia separated into eight countries (counting Kosovo); and in the Ukraine and other places, the story isn’t over yet.

The Palestinians owe us a debt of gratitude for being able to live in an area which, compared to the world around us, is a model of sanity and normality. Millions of people aren’t being evicted from their homes here because someone who happens to be stronger decided to kick them out. But instead of appreciating the stability maintained by Israel, which is not something to be taken for granted, instead of trying to preserve the sanity, the beat of the tom-toms can be heard throughout the jungle, firing up the very same instincts that are setting the rest of the region alight.

Israel has a will to live. At the end of the day, if a sword is hanging over our head forcing us to choose between closing up shop or throwing the crocodile out of our house to go live with its kind, then, as much as it pains me to say it, the disaster the Palestinians brought on themselves the last time will pale in comparison.