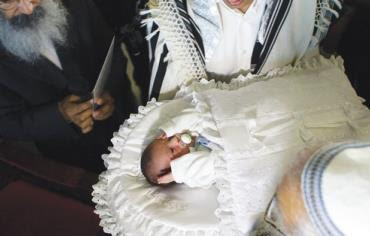 “We will review submissions on the matter before we can decide what should be the government’s position. We aim to present a bill before Easter,” Hoie told Aftenposten last week. He did not say whether the regulations would introduce new restrictions.
His announcement follows renewed calls by Norway Children’s Ombudswoman Anne Lindboe to ban non-medical circumcision of minors without their consent, which she says violates their rights.
“This is not due to any lack of understanding of minorities or religious traditions, but because the procedure is irreversible, painful and risky,” Lindboe told Aftenposten.

The Center Party, which won 5.5 percent of the vote in Norway general elections earlier this year, is in favor of banning non-medical circumcision of underage boys. The country’s largest party, Labor, has not yet formulated an official stance but several of its lawmakers support a ban.
Ervin Kohn, president of the Jewish community in Oslo, told JTA that he considers the issue “an existential matter” for the Jewish community of about 700 members.
Each year, approximately 2,000 Muslims and seven Jewish newborns undergo non-medical circumcision in Norway, according to Aftenposten.
In France, meanwhile, President Francois Hollande strongly affirmed his support for the protection of Jewish rights to circumcision in an Oct. 30 letter to the Consistoire, which oversees religious services for the Jewish community.
“There is no question whether this practice in Judaism, and other religions, is performed in accordance with existing laws in France,” he wrote.