Elder of Ziyon
Some Facebook idiot tried to refute one of my many posters proving that Israel isn't an "apartheid state" by creating this: 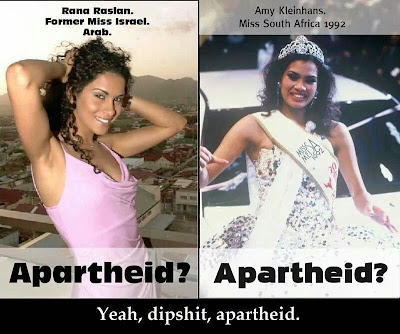 '
Unfortunately, as Israellycool points out,

Amy Kleinhans was crowned Miss South Africa in 1992, the year following the repeal of South Africa’s apartheid laws. It was the official end of apartheid that paved the way for her participation to begin with.

So the Amy Kleinhans poster actually reinforces the point about the Israel-Apartheid comparison being erroneous.


This is not the first time that Israel haters tried, hilariously, to counter my poster series.

It is clear that my posters are causing panic among the hate-Israel crowd, because these posters convincingly destroy the myth that they have been carefully nurturing over the years.

The posters page is by far the most popular thing I've ever published. They have been viewed over 110,000 times on my site directly and many, many more times from people who have recopied them to Facebook, Twitter and even showing them on college campuses. Just this past week, years after I started the series, more than 2000 people visited that page.

The haters are more frightened of the truth than they are of Israel itself.