PM reportedly willing to turn most of Judea, Samaria over to PA, expelling roughly 90,000 Jews from the region. 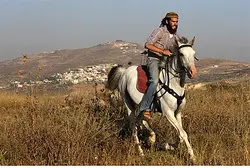 Jewish farmer in Samaria (Shomron) Jewish community of Havat Gilad
Flash 90
Prime Minister Binyamin Netanyahu has offered to give the Palestinian Authority full control over 90% of Judea and Samaria, Walla! news reports. The report is based on testimony from sources close to the secret Israel-PA talks.
Netanyahu’s reported offer still falls short of the PA’s demand to receive at least 97% of territory in the region.

Netanyahu is apparently seeking to minimize the need to expel Israeli citizens from their homes in Judea and Samaria. The region is home to roughly 360,000 Israeli Jews, but most are concentrated in around 2% of the area's actual landmass.
His latest offer would mean expelling 20-30% of them – or between 72,000 and 108,000 people. That seems like a fairly tall order, given that the government is still struggling to rehouse the roughly 10,000 Israelis expelled from Gaza and northern Samaria, nearly a decade after the 2005 "Disengagement".
Israel would keep the major “settlement bloc” areas with a majority-Israeli population, including the Ariel bloc, Gush Etzion, Maaleh Adumim, and the towns of Beit El and Karnei Shomron along with surrounding communities.
Netanyahu’s reported offer also calls for Israeli communities adjacent to the 1949 armistice line, but outside “settlement blocs,” to remain under Israeli control, and for an Israeli presence to continue in the city of Hevron.
PA leaders continue to demand at least 97% of territory in Judea and Samaria, full control over eastern Jerusalem, including the Temple Mount, the release of all terrorist prisoners, the ability to arm the PA police, and implementation of the so-called “right of return,” which would give millions of descendants of Arabs who left pre-state Israel during the War of Independence the freedom to “return” to Israel.