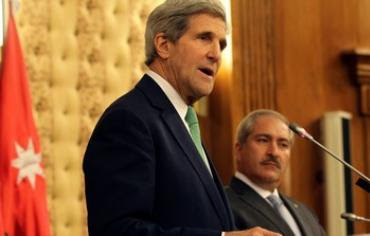 John Kerry at Amman press conference Photo: Reuters
US Secretary of State John Kerry painted a very bleak picture of what would be the result of a break-down in the current Israeli-Palestinian talks, warning on Thursday of a third intifada and international isolation of Israel
Kerry's warnings came in an unusual joint interview with Channel 2's Udi Segal and Maher Shalabi of Palestine TV.

"The alternative to getting back to the talks is the potential of chaos," Kerry said. "Does Israel want a third intifada?"
The Secretary of State's warnings of a third intifada came two days after a poll conducted by the Arab World For Research & Development showed that only 29% of West Bank and Gaza Palestinians said they would support a third intifada, though 60% believe one is possible.
Kerry's dire warnings echoed comments he made in Jordan after meeting King Abdullah II, and before a second meeting in two days with Palestinian President Mahmoud Abbas.

In a signal that the three-month old talks were indeed in a troubled spot, Kerry extended his visit another day and is scheduled to meet with Prime Minister Binyamin Netanyahu on Friday morning, for the third time since Wednesday. A meeting the two held Wednesday evening, following Kerry's first meeting with Abbas, went on past midnight, Israeli officials said.
"I believe that if we do not resolve the issues between Palestinians and Israelis, if we do not find a way to find peace, there will be an increasing isolation of Israel, three will be an increasing campaign of the de-legitimization of Israel that has been taking place on an international basis," he said in the interview..
"If we do not resolve the question of settlements, and who lives where and what rights they have; if we don't end the presence of Israeli soldiers perpetually in the West Bank, then there will be an increasing feeling that if you cannot get peace with a leadership that is committed to non-violence, we may wind up with a leadership that is committed to violence," he added.
In a press conference alongside Jordanian Foreign Minister Nasser Judeh in Amman on Thursday, Kerry reiterated this theme.  "What is the alternative to peace?" he asked. " Prolonged continued conflict. The absence of peace really means you have a sort of low-grade conflict, war."
He said that "as long as the aspirations of people are held down one way or another" and as long as the conflict continued without a solution, the "possibilities of violence" increase.
He did say, however, that both Netanyahu and Abbas "reaffirmed their commitment to these negotiations despite the fact that at moments there are obviously tensions."
Following his scheduled meeting with Netanyahu in Jerusalem on Friday, Kerry is to continue his regional visit with trips to the United Arab Emirates, Algeria and Morocco. He has already visited this week – in addition to Israel, the Palestinian Authority and Jordan – Egypt and Saudi Arabia.

Comment: Demands, demands on Israel-what demands do you have for the PA?  Any? Why not?