‘We have a clinical goldmine in our hands, and we must dig deeper,’ says lead Israeli researcher proposing that wild blind mole rats replace lab mice.
By Abigail Klein Leichman

The critter that doesn’t get cancer. Photo by Michael Margulis, Institute of Evolution, University of Haifa

Now picture the cancer research lab of the future – white coats, test tubes, and, if Prof. Aaron Avivi at Haifa University has his way — cages of mole rats.
Pioneering studies in Israel appear to demonstrate that the subterranean Israeli blind mole rat, Spalax, is far superior to lab mice for the purpose of cracking the mystery of human cancer.

These wild rodents are extremely resistant to cancer and live 10 times as long as mice, according to Avivi, head of the Laboratory of Subterranean Mammals Biology in the Evolution Institute of Haifa University, and senior researchers Imad Shams, PhD, and Dr. Irena Manov.

Farmers may hate these hairy, sausage-shaped pests that live in underground tunnels, but cancer researchers will learn to love them, Avivi promises.
“We claim that defense mechanisms developed along tens of million years of evolution must necessarily be a better key to solving cancer — and not the cancer-prone, short-lived inbred rat and mouse that are already laboratory products,” Avivi tells ISRAEL21c.


“We truly believe that we have found the potential ‘missing good organism’ that the community of cancer researchers is seeking to progress in our effort to solve cancer in humans.”
Their remarkable longevity and lack of age-related diseases is also being studied by Israeli and other scientists around the world.
Why don’t they get cancer?
Since retired Prof. Eviatar Nevo initiated Spalax research 40 years ago at the Haifa campus, none of the thousands of animals ever developed spontaneous tumors. 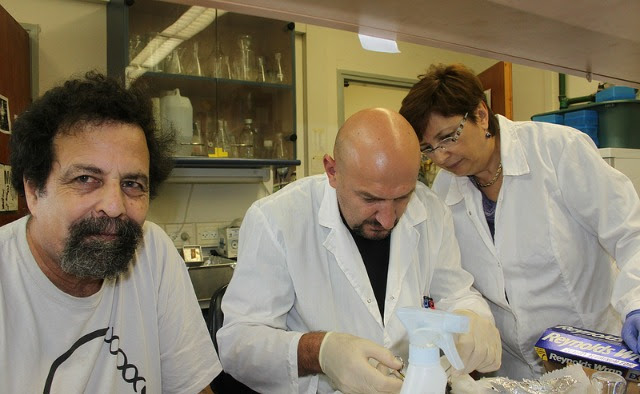 Avivi and his colleagues suspect the creatures’ cancer resistance is tied to their ability to survive abrupt and sharp changes in oxygen supply. Hypoxia, a condition caused by a lack of oxygen, leads to human heart and lung diseases, brain strokes and cancer.

“The fact that it is tolerant to hypoxia is related to the fact that it is free of ailments as it ages, and we deduce that this is the reason why it survives over 20 years, while rats of the same size and weight survive only four years,” Avivi says.

The team’s August article in BMC Biology proved for the first time that it is nearly impossible to induce cancer in the BMR through treatment with carcinogens that always caused tumors in mice and rats.
The diamond in the crown is that normal cells propagated from this little animal fight off cancer cells from different tissues and different species, including human. The same cells from control groups of lab mice, rats and wild spiny mice lack this remarkable ability.
“Our effort now is to try and identify, isolate and purify the substance/s that only the blind mole-rat secretes, and to discover with what component/s it interacts that is active only on cancer cells,” he says. “This might lead to a medicine for humans suffering from cancer.”
The search for funding
So far, so good.
The problem is that grant proposals from Avivi’s team get routinely rejected, on the grounds that funding sources “are not familiar with this wild, natural organism, and will not support studies on ‘non-classical’ organisms,” Avivi explains.
Last year, the popular journal Nature devoted an editorial to this frustrating situation.
“We do not underestimate the huge amount of knowledge accumulated from decades of cancer studies on mice,” Avivi says. “They have taught us a great deal on cancer initiation, progression, inhibition and cure in mice.”
Yet, many leading cancer researchers agree with MIT Prof. Robert Weinberg’s statement to Newsweek in 2008: “Mice have little predictive value and a negligible relation to human cancer. Far more than anything else, the lack of good experimental animals has become the rate-limiting step in human cancer research.”
“Our results are original, never have been demonstrated or published, and open a completely new horizon in cancer research for human welfare,” claims Avivi.
The world scientific community has encouraged the Israeli team, predicting that their finding could be a major breakthrough.
“We concluded that we have a clinical goldmine in our hands, and we must dig deeper,” asserts Avivi.