Yom Kippur no respite from attacks for Jerusalem family as rioters target young children with firebombs.
By Arutz Sheva
First Publish: 9/17/2013, 1:15 AM 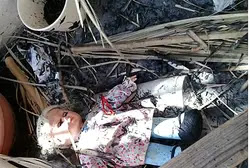 The Fairman family's demolished sukkah
Courtesy of the Fairman family
Yom Kippur, the holiest day of the Jewish year, nearly ended in tragedy for the Fairman family of Jerusalem. In the middle of the night, the family was targeted with firebombs in an attack that destroyed many of their children’s possessions, and nearly burned down the entire house.

The Fairman family lives in a predominantly Arab area of the mixed Jewish-Arab neighborhood of Abu Tor in Jerusalem. While life is quiet just a five minute walk away, the Fairmans and the other Jewish families in their building have grown used to frequent attacks.

Bat-Ami Fairman was in the house with her two young sisters, ages 7 and 9, and her baby.

“The children had already gone to sleep. We were in our rooms when suddenly we heard that they were throwing rocks and metal at us from outside,” she told Arutz Sheva.

“We’re already used to it, so we didn’t get up,” she continued. “But when we heard a bottle explode, we realized we needed to run.”


Bat-Ami grabbed her sisters and baby and ran to her mother’s apartment nearby. One firebomb had missed its target, but a second one hit the family’s sukkah, a temporary hut built for the Sukkot holiday, and set it on fire.
“I heard the sound of little explosions as it burned… the flames were two meters high,” she recalled. A security guard tried to put out the fire, but with no success. Bat-Ami realized that the flames could reach the second floor and enter the rooms.
The family later saw that the first firebomb had been aimed at the living room window. Bat-Ami believes that the attackers saw her sister, who was clearly visible through the window, and were aiming for her.
By the time firefighters arrived, the flames had reached the entrance to the home. The firefighters were able to save the house, but were unable to save the children’s toys, which had been near the entrance. A wading pool, see-saw, and many other games were destroyed.
For children who are sometimes unable to leave their homes due to Arab attacks, the toys for at-home use are crucial, Bat-Ami explained. But the children still have their ideals to keep them going, she added, “The families that live here are families that teach the value of the land of Israel from age zero.”
The fire at the Fairman home was put out, and the family was allowed to return to the building. They found the rooms where the smell of burning was weakest, and went to sleep.
Bat-Ami Fairman said she believes police will eventually catch the attackers, because of the attack’s severity. She noted that when an Arab gang hurled cement blocks at Jews in the same area one week earlier, police managed to track down two of the attackers, and anticipate more arrests.
Jews in Abu Tor have been the target of firebomb attacks in the past. An attack in February nearly set an entire building on fire when a firebomb narrowly missed a gas pipe.