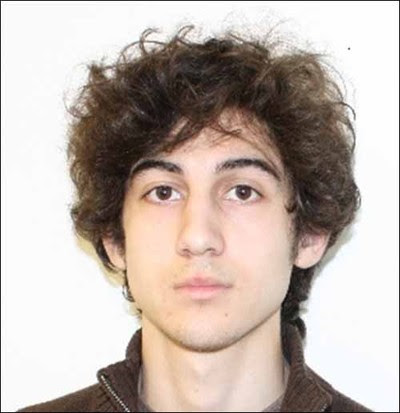 While police in and around Boston hunt for 19-year-old Dzhokhar Tsarnaev, one of the suspectedBoston Marathon bombers, information gathered from various social media outlets indicate that he and his brother, 26-year-old Tamerlan Tsarnaev, harbored radical Islamic beliefs.
Tamerlan Tsarnaev was killed overnight as police closed in on him and the hunt for Dzhokhar remains active. An MIT security officer was shot and killed in the firefight.
This is believed to be Dzhokhar Tsarnaev's Youtube page. Several of the posts feature radical Islamic rhetoric. In addition, a graphic video about Syria appears on Tsarnaev's page on a Russian version of Facebook. An IPT translation can be seenhere. Among its statements, "Congratulations to you those suffer for, who go through martyrdom of Allah illaha ill Allah."


The brothers came to the United States from Southern Russia, near Chechnya, a predominantly Muslim state which declared independence from Russia in 1991, resulting in years of violence and terrorist strikes. Another video Tsarnaev posted was simply called "Terrorists." But that video has been taken down. Yet another that was posted last summer, lauds "The promised emergence of the black flags from the promised land of Khorasan." It celebrates jihadis posing "with a flag of the Taliban's Islamic Emirate of Afghanistan," the Long War Journal reported. The video has an apocalyptic message anticipating a time when the forces of Islam, led by the Mahdi, the Guided One, will conquer the world prior to the Day of Judgment. Part of this battle will be the conquest of the Holy Land.
Tamerlan Tsarnaev was a boxer who told an interviewer in 2009 that he had no American friends. "I don't understand them," he said. An Amazon.com wish listbelieved to be Tamerlan's includes several books on forgery and the books The Lone Wolf And the Bear: Three Centuries of Chechen Defiance of Russian Rule and Allah's Mountains: The Battle for Chechnya, New Edition.
Eric Mercado, a former high school classmate of Dzhokhar Tsarnaev, told CNN that he and his friends remember a conversation in which Tsarnaev said, "When justified, terrorism isn't necessarily a bad thing." The comment was dismissed as outlandish. "No one wants to believe that their friend from high school is a quote-unquote 'terrorist,'" Mercado said.
The bombs, reportedly packed inside pressure cookers, bear striking resemblances to instructions offered by al-Qaida in the Arabian Peninsula's Inspire magazine. One article suggested that pressure cooker bombs should be "placed in crowded areas and left to blow up. More than one of these could be planted to explode at the same time. However, keep in mind that the range of the shrapnel in this operation is short range so the pressurized cooker or pipe should be placed close to the intended targets and should not be concealed from them by barriers such as walls."
This story has been updated to more accurately describe the Tsarnaev's roots.
Posted by GS Don Morris, Ph.D./Chana Givon at 1:52 AM