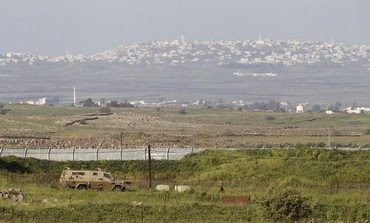 Israeli Syrian border in the Golan Heights Photo: REUTERS/Baz Ratner
UNITED NATIONS - The UN Security Council voiced concern on Wednesday about repeated violations of the ceasefire line between Syria and the Golan Heights and the danger to UN peacekeepers there due to the escalating Syrian civil war.

"The members of the Security Council expressed grave concern at all violations of the Disengagement of Forces Agreement," the council said, adding that it also voiced "grave concern at the presence of the Syrian Arab Republic Armed Forces inside the area of separation." UNDOF has the task of monitoring an "area of separation" between Syrian and Israeli forces, a narrow strip of land running 45 miles (70 km) from Mount Hermon on the Lebanese border to the Yarmouk River frontier with Jordan.

In its statement, the council also "expressed grave concern at the presence of armed members of the opposition in the area of separation." The council "called on all parties, including armed elements of the Syrian opposition, to respect UNDOF's freedom of movement and the safety and security of its personnel, while recalling that the primary responsibility for safety and security ... rests with the Syrian Government." Israel captured the Golan plateau from Syria in the 1967 Middle East war.

The capture of the 21 peacekeepers this month was the latest challenge for the UN force, comprising troops from the Philippines, India, Croatia and Austria.


Japan said it was withdrawing soldiers from UNDOF three months ago in response to the violence in Syria. Croatia said last month it would also pull out its troops as a precaution after reports that Croatian arms had been shipped to Syrian rebels. Croatia denied the reports.

Israel said earlier this month that it could not be expected to stand idle as Syria's civil war, in which 70,000 people have been killed, spilled over into the Golan Heights.