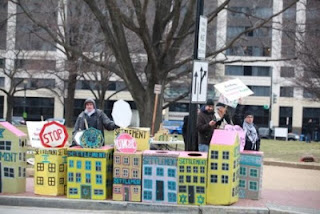 
Jewish houses, as envisioned by the crazy bunch of fun-loving leftist Code Pink racists, all have three stories and Jewish Stars painted on the front, so no one confuses them with human houses. They’re also only one foot tall because Jews are actually munchkins or hobbits.
Code Pink probably likes Jewish houses to be made of a size and out of a material that they can easily stomp on. Unfortunately for them they are outnumbered by their own Evil Jew Munchkin houses which are spreading all over the capital.

Another photo, also from Haaretz’s Natasha Mozgovaya, features two escaped mental patients depicting the great challenge of bypassing AIPAC’s bloodsoaked barbed wire security while carrying a cardboard machine gun. Some things even Instagram can’t fix. This is one of them.