The would-be secretary of defense has some curious views.

Prejudice—like cooking, wine-tasting and other consummations—has an olfactory element. When Chuck Hagel, the former GOP senator from Nebraska who is now a front-runner to be the next secretary of Defense, carries on about how "the Jewish lobby intimidates a lot of people up here," the odor is especially ripe.
Ripe because a "Jewish lobby," as far as I'm aware, doesn't exist. No lesser authorities on the subject than John Mearsheimer and Stephen Walt, authors of "The Israel Lobby," have insisted the term Jewish lobby is "inaccurate and misleading, both because the [Israel] lobby includes non-Jews like Christian Zionists and because many Jewish Americans do not support the hard-line policies favored by its most powerful elements."


Ripe because, whatever other political pressures Mr. Hagel might have had to endure during his years representing the Cornhusker state, winning over the state's Jewish voters—there are an estimated 6,100 Jewish Nebraskans in a state of 1.8 million people—was probably not a major political concern for Mr. Hagel compared to, say, the ethanol lobby. 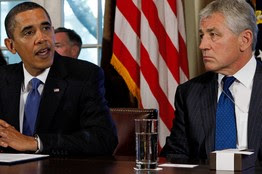 Reuters
A United States senator, not an Israeli one. In case there was any doubt.
Ripe because the word "intimidates" ascribes to the so-called Jewish lobby powers that are at once vast, invisible and malevolent; and because it suggests that legislators who adopt positions friendly to that lobby are doing so not from political conviction but out of personal fear. Just what does that Jewish Lobby have on them?

Ripe, finally, because Mr. Hagel's Jewish lobby remark was well in keeping with the broader pattern of his thinking. "I'm a United States Senator, not an Israeli Senator," Mr. Hagel told retired U.S. diplomat Aaron David Miller in 2006. "I'm a United States Senator. I support Israel. But my first interest is I take an oath of office to the Constitution of the United States. Not to a president. Not a party. Not to Israel. If I go run for Senate in Israel, I'll do that."

Read these staccato utterances again to better appreciate their insipid and insinuating qualities, all combining to cast the usual slur on Jewish-Americans: Dual loyalty. Nobody questions Mr. Hagel's loyalty. He is only making those assertions to question the loyalty of others.

Still, Mr. Hagel managed to say "I support Israel." This is the sort of thing one often hears from people who treat Israel as the Mideast equivalent of a neighborhood drunk who, for his own good, needs to be put in the clink to sober him up.

In 2002, a year in which 457 Israelis were killed in terrorist attacks (a figure proportionately equivalent to more than 20,000 fatalities in the U.S., or seven 9/11s), Mr. Hagel weighed in with the advice that "Israel must take steps to show its commitment to peace." This was two years after Yasser Arafat had been offered a state by Israeli Prime Minister Ehud Barak at Camp David.

In 2006, Mr. Hagel described Israel's war against Hezbollah as "the systematic destruction of an American friend, the country and people of Lebanon." He later refused to sign a letter calling on the European Union to designate Hezbollah as a terrorist organization. In 2007, he voted against designating Iran's Revolutionary Guards Corps as a terrorist organization, and also urged President Bush to open "direct, unconditional" talks with Iran to create "a historic new dynamic in U.S.-Iran relations." In 2009, Mr. Hagel urged the Obama administration to open direct talks with Hamas.

In fairness to Mr. Hagel, all these positions emerge from his belief in the power of diplomatic engagement and talking with adversaries. The record of that kind of engagement—in 2008, Mr. Hagel and John Kerry co-authored an op-ed in this newspaper titled "It's Time to Talk to Syria"—hasn't been stellar, but at least it was borne of earnest motives.

Yet it's worth noting that while Mr. Hagel is eager to engage the world's rogues without preconditions, his attitude toward Israel tends, at best, to the paternalistic.
"The United States and Israel must understand that it is not in their long-term interests to allow themselves to become isolated in the Middle East and the world," he said in a 2006 Senate speech. It's a political Deep Thought worthy of Saturday Night Live's Jack Handey. Does Mr. Hagel reckon any other nation to be quite so blind to its own supposed self-interest as Israel?

Now President Obama may nominate Mr. Hagel to take Leon Panetta's place at the Pentagon. As a purely score-settling matter, I almost hope he does. It would confirm a point I made in a column earlier this year, which is that Mr. Obama is not a friend of Israel. Perhaps the 63% of Jewish-Americans who cast their votes for Mr. Obama last month might belatedly take notice.

Alternatively, maybe some of these voters could speak up now, before a nomination is announced, about the insult that a Secretary of Defense Chuck Hagel would be. Jewish Democrats like to fancy their voice carries weight in their party. The prospect of this nomination is their chance to prove it.
Write to bstephens@wsj.com


A version of this article appeared December 18, 2012, on page A15 in the U.S. edition of The Wall Street Journal, with the headline: Chuck Hagel's Jewish Problem.