Government grows in size and power as the individual shrinks into dependency. Until the tipping point where dependency becomes the new norm – as it is in Europe. 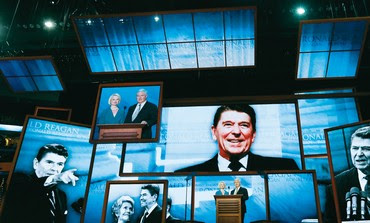 WASHINGTON – “Ronald Reagan changed the trajectory of America in a way that Richard Nixon did not and in a way that Bill Clinton did not.” That was Barack Obama in 2008. And he was right. Reagan was an ideological inflection point, ending a 50-year liberal ascendancy and beginning a 30-year conservative ascendancy.

It is common for one party to take control and enact its ideological agenda. Ascendancy, however, occurs only when the opposition inevitably regains power and then proceeds to accept the basic premises of the preceding revolution.

Thus, Republicans railed for 20 years against the New Deal. Yet when they regained the White House in 1953, they kept the New Deal intact.

Until Reagan. Ten minutes into his presidency, Reagan declares that “government is not the solution to our problem, government is the problem.”

Having thus rhetorically rejected the very premise of the New Deal/Great Society, he sets about attacking its foundations – with radical tax reduction, major deregulation, a frontal challenge to unionism (breaking the air traffic controllers for striking illegally) and an (only partially successful) attempt at restraining government growth.

Reaganism’s ascendancy was confirmed when the other guys came to power and their leader, Bill Clinton, declared (in his 1996 State of the Union address) that “the era of big government is over” – and then abolished welfare, the centerpiece “relief” program of modern liberalism.

In Britain, the same phenomenon: Tony Blair did to Thatcherism what Clinton did to Reaganism. He made it the norm.

Obama’s intention has always been to renormalize, to reverse ideological course, to be the anti-Reagan – the author of a new liberal ascendancy. Nor did he hide his ambition. In his February 2009 address to Congress he declared his intention to transform America.

This was no abstraction. He would do it in three areas: healthcare, education and energy.

Think about that. Healthcare is one-sixth of the economy. Education is the future. And energy is the lifeblood of any advanced country – control pricing and production and you’ve controlled the industrial economy.

And it wasn’t just rhetoric. He enacted liberalism’s holy grail: the nationalization of healthcare. His $830 billion stimulus, by far the largest spending bill in US history, massively injected government into the free market – lavishing immense amounts of tax dollars on favored companies and industries in a naked display of industrial policy.

And what Obama failed to pass through Congress, he enacted unilaterally by executive action. He could not pass cap-and-trade, but his EPA is killing coal. (No new coal-fired power plant would ever be built.) In 2006, liberals failed legislatively to gut welfare’s work requirement. Obama’s new HHS rules does that by fiat. Continued in a second term, it would abolish welfare reform as we know it – just as in a second term, natural gas will follow coal, as Obama’s EPA regulates fracking into noncompetitiveness.

Government grows in size and power as the individual shrinks into dependency. Until the tipping point where dependency becomes the new norm – as it is in Europe, where even minor retrenchment of the entitlement state has led to despair and, for the more energetic, rioting.

An Obama second term means that the movement toward European-style social democracy continues, in part by legislation, in part by executive decree. The American experiment – the more individualistic, energetic, innovative, risk-taking model of democratic governance – continues to recede, yielding to the supervised life of the entitlement state.

If Obama loses, however, his presidency becomes a historical parenthesis, a passing interlude of overreaching hyper-liberalism, rejected by a center-right country that is 80 percent nonliberal.

Should they summon the skill and dexterity, Mitt Romney and Paul Ryan could guide the country to the restoration of a more austere and modest government with more restrained entitlements and a more equitable and efficient tax code. Those achievements alone would mark a new trajectory – a return to what Reagan started three decades ago.

Every four years we are told that the coming election is the most important of one’s life. This time it might actually be true. At stake is the relation between citizen and state, the very nature of the American social contract.