Mass Rally Against 'Perilous' US Middle East Policy to be Held

A coalition of groups concerned over Iranian and Arab terrorism and Islamism, both Jewish and non-Jewish, is set to rally Thursday
By David Lev
First Publish: 9/27/2012, 9:49 AM 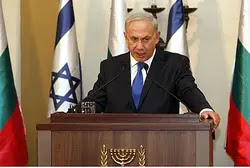 Prime Minister Binyamin Netanyahu
AFP/Pool/File
A coalition of groups concerned over Iranian and Arab terrorism and Islamism, both Jewish and non-Jewish, will hold a protest Thursday afternoon in front of the Israeli Consulate in Manhattan, as Prime Minister Benjamin Netanyahu speaks before the UN General Assembly. The mass rally, set for 12:30 PM, is sponsored by a host of groups, including Americans for a Safe Israel (AFSI), AMCHA, Coptics of Egypt, HRCARI, Mothers Against Terorism, NCJA, Strength to Strength, ZOA, and many more grass-roots organizations.

The groups will express their concern over what they say has been the “perilous” foreign policy of the Obama administration regarding Iran and the Arab world. Helen Freedman, Executive Director of AFSI, said that “the perilous situation in which President Obama has placed America, Israel, and the western world, cries out for mass demonstrations on the part of Americans. Islamists are rioting in the cities of the Arab world, American flags are being burned, America’s diplomats have been brutally murdered by Al Qaeda in Libya, Syria is wantonly murdering its own people, the terrorist regime of the Muslim Brotherhood in Egypt gets stronger by the day, and indeed the entire Middle East is burning, while the Obama administration blames it all on a You Tube clip, and the President spends his time campaigning and appearing on TV programs.

“The dark cloud hanging over all of this is the certainty that Iran is advancing in its nuclear weapons program and the refusal of President Obama to put down any red lines which Iran must not cross,” Freedman said. “Although President Obama has declared he has Israel’s back, his actions prove the opposite. President Obama’s refusal to meet with PM Netanyahu, and his many security leaks and efforts to prevent Israel from defending itself, are empowering Iran and are unconscionable.”

The rally is expected to draw many thousands of participants, and will feature speakers from the sponsoring groups, along with government officials and communal leaders. The event will take place at the corner of 42nd Street & 2nd Ave., starting at 12:30 P.M.

Comment:
Is there any civilized person who could imagine that the UN would descend into the depths of hell as it has?!
A madmen is permitted to threaten the existence of a legitimate country like Israel that was reborn with a vote by that international body?  It should be obvious that the UN is no longer a legitimate organization; it has been hijacked by those who are enemies of freedom loving countries.  Time for this group of
Unwanted Nobodies to disband.  The world needs a new organization that lives up to democratic principles.
Posted by GS Don Morris, Ph.D./Chana Givon at 3:51 PM