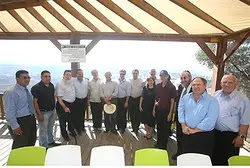 Knesset’s Land of Israel lobby in the Binyamin region
Miri Tzahi (Makor Rishon)
Members of the Knesset’s Land of Israel lobby toured the Binyamin region on Sunday, where they called on the Israeli government to formally adopt the government-initiated Levy Report, which studied the land issues in depth and concluded that there is no “occupation” and that international law allows Jews to live in Judea and Samaria as its status was not that of a nation in 1967.

During the tour, the members of the Land of Israel lobby heard about the problems and difficulties which local residents face and that the adoption of the Levy Report by the government would solve. The area is run by a Civil Government under IDF auspices, causing residents to be under Israeli jurisdiction for some issues and under the IDF - and even Jordanian law - for others.

MK Eldad told Arutz Sheva during the tour, “Recently we witnessed the destruction of the Ulpana [neighborhood in Beit El] and we saw the Israeli government destroying Migron and we understand that if the Netanyahu government would adopt the legal recommendations of the Levy Report, all these obstacles that prevented the preservation of Migron and the Ulpana could be prevented. We could have saved these settlements.”
He added, “The next threat is on Givat Assaf and Amona and if the Levy Report is not adopted, Amona will be destroyed, Givat Assaf will be destroyed and many other settlements [will be destroyed] as well. So we came here today to call, from here, on the government to fully adopt the Levy Report.”

Eldad admitted, however, that he was not optimistic that the Netanyahu government would act to prevent future demolitions of Jewish communities.

MK Ya’akov Katz (National Union) noted the great growth in the Jewish population in Judea and Samaria and said, “The State of Israel has to understand that the more than 45 years that he we have been in Judea, Samaria, the Golan Heights and east Jerusalem are longer than the 19 years that we were not in those areas. Most of the Jewish people and most of the citizens in Israel today were born already in the ‘big’ Eretz Yisrael, which is still not so big, rather than in the ‘small’ Eretz Yisrael.”