The National Union and Jewish Home parties would win 12 Knesset seats if elections were held today, according to a new independent poll.
By Tzvi Ben Gedalyahu 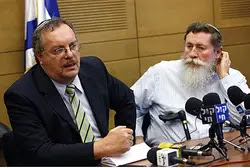 The National Union and Jewish Home parties would win 12 Knesset seats if elections were held today, according to a new independent poll.

The combined total of 12 seats is almost twice the current number and reflects a movement of nationalists from the Likud party after Prime Minister Binyamin Netanyahu averted new elections by coaxing the center-left Kadima party to join a national unity coalition.


The Geocartography results project a coalition that would give the National Union, which is not in the current coalition government, and Jewish Home more clout. The projected national religious coalition would include 74 Knesset members, without the presence of Yair Lapid’s new Future party and without Labor or Kadima.

Geocartography, one of Israel’s largest polling companies and headed by Prof. Avi Dagni, carried out the survey which shows a loss of strength for both the Likud and Kadima.

The most significant result other than the increase in the strength of national parties is the zero representation for Defense Minister Ehud Barak, who broke off from Labor last year to from the Independence party.

The elections are scheduled for next year when the present Knesset’s term expires, unless the coalition falls apart.
Posted by GS Don Morris, Ph.D./Chana Givon at 5:15 PM

As I am quiet new in Jewish, looking around for some Jewish information> Got something important here. Nice to get it.
Have you seen this video http://goo.gl/DT6FN It helped me get over my internal anger.