Syria is in civil war


Spain, 1936. An army revolt against the democratically elected government sets off a civil war. 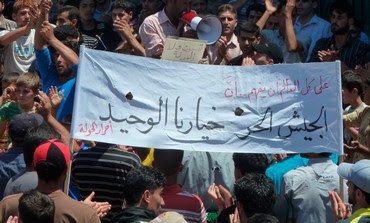 Photo: REUTERS
‘We protest with all our power against the sham, the hypocritical sham, that [the nonintervention policy] now appears to be.” – Philip Noel-Baker, House of Commons, October 29, 1936.

Spain, 1936. An army revolt against the democratically elected government sets off a civil war. On one side are the Fascists, led by General Francisco Franco. On the other side is a coalition of democrats both socialist and liberal; communal nationalists; anarchists, Communists and independent Marxists. The Western democracies declare an embargo: no arms to be sold to the Loyalist side. But Nazi Germany and Fascist Italy help the rebels, while Stalin’s USSR helps the Communists, increasing their power within the Loyalist coalition. In the end, the Fascists win and rule Spain for decades.


Syria, 2012. The people revolt against the dictatorship, setting off a civil war. On one side is the anti-American, repressive Syrian regime that itself became a champion of revolutionary Islamism; its ally, Iran; and Hezbollah. On the other side is a coalition of democrats, communal nationalists, and Islamists. The Western democracies declare an embargo: no arms to be sold to the rebels. But Shia Islamist Iran and Russia help the regime, while Turkey and the Muslim Brotherhood help the Islamists, increasing their power within the rebel coalition. In the end, either the regime wins or the Islamist component among the rebels is more likely to win.


This is why UN Ambassador Susan Rice is speaking nonsense when she says: “Our view has been that the best way to resolve this is not by intensifying the militarization, not by providing further arms into what is already a hot conflict – but to try to resolve it through non-military means, through a diplomatic and political process.”

IT’S ALREADY a fratricidal war. To decry militarization when your enemies are rushing in arms and while there can be no diplomatic solution between two sides engaged in a battle to the death is absurdly hypocritical. Rice continues: “For this to become a proxy war with countries all over the region and beyond funneling weapons in there is basically conceding a massive fire burning in that region. For those who are advocating arming the opposition, they really ought to consider the consequences of that approach and also to ask, frankly, who are they arming inside of the Syrian opposition.”

It is already a proxy war, but the only ones helping their proxies are America’s enemies, and while it is true that there are such forces also among the rebels – a point that never bothered the Obama administration over Libya – a decent policy should be able to ensure that the arms don’t go to the Brotherhood and Salafists but to units commanded by officers who have defected from the army; Kurdish and Druse communal nationalists; and moderates.

IN SEVERAL respects, the Syrian civil war is the Spanish Civil War of our time. It is an exhibition match between two ideological rivals – Shia Islamism and Sunni Islamism – that cannot co-exist. It is a testing ground for the conflicts to come. Yet it is also not a simple battle of good against evil. The Syrian regime is certainly evil, but the rebels are a mixed bag. The best elements deserve the outside world’s support.

Yet the democratic outside world is, for all practical purposes, standing passive.

The Iranian regime is helping one side with huge amounts of money and arms, as Nazi Germany did for the Franco forces; the Turkish regime and the Saudis are helping the other side a bit, but giving disproportionate assistance to the Muslim Brotherhood, like the USSR gave to the Communists in Spain. Indeed, US policy is aiding the Brotherhood, too.

Nobody is helping the moderate, pro-democracy people; the Druse and Kurdish communal nationalists; and the technocratic military officers who have put their lives on the line to fight the dictatorship.

Why stand and watch while the Iranian- Syrian bloc, determined to destabilize the region and destroy US interests, crushes those who want democracy? Why stand and watch (and even help!) while the Muslim Brotherhood and Turkey, determined to foment Islamist revolution and destroy US interests, seize control of the opposition and seek to impose a new and equally ferocious dictatorship on Syria? Yes, despite all the smug “pro-democracy” rhetoric coming out of the Obama administration and others, nobody is helping the moderates who are doomed either to being crushed by the repressive regime or being overwhelmed by the totalitarians on their own side. This is a tragedy but it is a tragedy in which passivity is as powerful a force as is evil. That the Obama administration is mouthing platitudes about human rights and supporting democracy makes the situation altogether more sickening.

When the dictatorship defeats the opposition and hundreds of people are massacred or, albeit less likely but possible, if the Islamists turn Syria into another totalitarian regime in an alliance to destroy Western interests in the region, let’s have no doubt who is also responsible.

The writer is the director of Global Research in International Affairs (GLORIA) Center. He also publishes the Rubin Report blog http://rubinreports.blogspot.com/
Posted by GS Don Morris, Ph.D./Chana Givon at 6:42 AM