Farmer working in field in Eshkol Regional Council area hides behind tractor until IDF soldiers arrive to evacuate him. 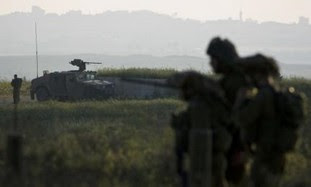 Photo: REUTERS/Amir Cohen
A Palestinian sniper in the southern Gaza Strip fired at an Israeli farmer working in a field near Kibbutz Nir Oz in the Eshkol Regional Council area on Thursday.

The man was not injured, hiding behind a tractor until IDF soldiers arrived and evacuated him to safety. IDF soldiers returned fire toward the Palestinian sniper.

The tractor's  windshield was shattered by the Palestinian sniper's fire.

Last month, a Palestinian sniper in the central-Gaza area shot and wounded two IDF soldiers. The IDF said that the soldiers were part of a patrol along the border when shots were fired hitting both an officer and a soldier. They were evacuated to a hospital where they were treated for mild injuries.
A week later, St.-Sgt. Netanel Moshiashvili was killed in a clash with a Palestinian gunman who had infiltrated Israel from the Gaza Strip.

The IDF said the gunman crossed into Israel at 5 a.m. on June 1 after cutting through the security fence using “sophisticated means.” Moshiashvili was killed when his unit engaged the terrorist. The troops returned fire, killing the gunman who was later identified as Ahmed Nassir.
Yaakov Katz contributed to this report.