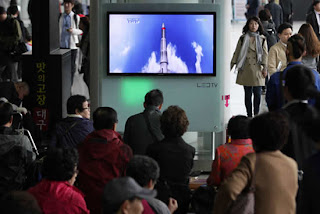 The launch comes as the rogue nation is continuing its transition to new leadership under dictator Kim Jong-un, who replaced his father Kim Jong-il after his death in December. In addition to the missile test, it has been reported that North Korea may also be in the “final stages” of preparations for another nuclear test, leading to escalating tensions that could spur Jong-un to undertake more provocative military actions. This is despite promising on February 29 to agree to a “moratorium on nuclear tests, long-range missile launches, and uranium enrichment activity at Yongbyon and [would] allow the IAEA to monitor the moratorium on uranium enrichment while productive dialogues continue.” The Obama Administration was criticized for accepting this vague statement as a bilateral agreement without insisting on a detailed joint document that clearly laid out both sides’ commitments. Today, we see the result as North Korea is claiming that its test did not violate the terms of the agreement.

North Korea’s missile reportedly failed shortly after launch, but nevertheless demands a strong U.S. response. Heritage’s Bruce Klingner writes of the growing danger under the country’s new leadership, warning that Jong-un “is more likely than his father Kim Jong-il to miscalculate during a crisis, unaware that Seoul is more likely to retaliate to a military clash than in the past.” Klingner also notes that President Obama has undermined America’s ability to confront the North Korean threat:

North Korea’s actions are taking place as the Obama Administration is failing to adequately resource its much-vaunted Asia pivot. Drawdowns in U.S. forces in Europe and Afghanistan are not shifting to address growing Asian threats–a case of robbing Peter to not pay Paul. The planned cuts to the U.S. military undercut Washington’s ability to fulfill its security commitments, even as North Korea and China are acting more assertively.

As South Korea calls for action at U.N. Security Council, Klingner says there are several steps the United States can and should take in response to North Korea’s actions. First and foremost, the United States should submit a new U.N. Security Council resolution requiring more extensive sanctions on North Korea and enabling naval ships to intercept North Korea ships suspected of transporting precluded nuclear, missile, and conventional arms, components, or technology. In addition, Klingner writes, the United States should demand that all U.N. member nations fully implement U.N. resolutions requirements to prevent North Korea’s procurement and export of missile-related and WMD-related items and technology, and freeze the financial assets of any involved North Korean or foreign person, company, or government entity.

There are more steps that Washington can take, such as independently imposing sanctions on any company, bank, or government agency complicit in North Korean proliferation, while calling leading other nations in efforts to do the same. Meanwhile, the United States should fully fund its defense requirements and maintain a robust presence in South Korea and Japan, while also continuing missile defense deployment and working with South Korea to deploy its own system.

North Korea’s missile launch is a severe violation of several U.N. resolutions, and a failure to hold it accountable would undermine international attempts to keep the country’s behavior in check. The Obama Administration must take action now to neutralize and diminish the North Korean threat.

The U.S. Conference of Catholic Bishops issued a declaration on Thursday warning that all Americans should be “on guard” as the Obama administration threatens religious liberty. “We need … to speak frankly with each other when our freedoms are threatened. Now is such a time,” they wrote.
Though President Obama is attempting to slash the U.S. military’s budget, House Armed Services Committee Chairman Buck McKeon (R-CA) is planning on setting defense spending levels at a higher level, despite the President’s budget proposal and caps agreed to last year.
Ann Romney is defending her role as a stay-at-home mom after a Democratic strategist said she had “never worked a day in her life.” Romney took to Twitter for the first time and wrote, “I made a choice to stay home and raise five boys. Believe me, it was hard work.”
Iran is meeting today with the United States, France, Russia, China, Britain and Germany for talks on the country’s nuclear program. Iran is believed to be in pursuit nuclear weapons capabilities despite international opposition — a threat which has prompted Israel to hint at pre-emptive strikes to defend itself.
Lunchtime Web Chat: Join us today from 12 to 1 pm as we discuss Taxmageddon — the massive tax increases coming in 2013 — and President Obama’s “Buffett Rule.” Find out how these policies will affect you.