MSM is also our enemy 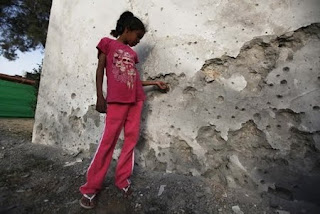 An Israeli girl in Beersheva examines ball bearings embedded in the wall of a school building damaged by a Grad missile fired from Gaza. The school was closed when the rocket landed, and no one was hurt.

While southern Israel hunkers down under a massive barrage of deadly rockets — only effective warning and anti-missile systems have so far prevented any deaths — the usual suspects in the media are pumping out the usual message: Israel is the aggressor, killing Palestinian civilians. For example, an AP report begins like this:

Leaving aside the fact that the 15-year old ‘schoolboy’ was almost certainly not killed by an Israeli airstrike, but rather when an explosive device that he was carrying went off, the emphasis in the article and the headline is placed on Israel’s actions to suppress the attack in which about 240 rockets have been fired at Israel since Friday, and not the attack itself.

This morning NPR broadcast a report from its Jerusalem correspondent. I’ve transcribed some of it and I’ll intersperse my comments:

[Steve Inskeep] …and we’re also reporting on violence on the border between Israel and the Gaza Strip: The shooting stretched through the weekend and into today. Israeli airstrikes killed two more people today in Gaza, that Palestinian-held area, bring the total to 20. Israelis have been bombing, Palestinian have been firing rockets into Israel, and NPR’s Lourdes Garcia Navarro has been following the story. Lourdes, what’s the latest?

Note that they take the same approach as the AP, emphasizing defensive Israeli actions against combatant targets and de-emphasizing terrorist rocket attacks against Israeli civilians. ‘People’, not ‘militants’ or ‘fighters’ or (fat chance) ‘terrorists’ were killed.

[Lourdes Garcia Navarro]: Well Steve, this morning we’ve seen more sorties by Israeli aircraft, and multiple strikes inside the Gaza Strip. Medical officials in Gaza confirm two men were killed so far today. The Israelis say they were targeting a team preparing rockets to fire into Israel. Overnight there were rockets successfully fired and landed inside Israel. In fact over fifty rockets were fired in total yesterday. For a second day today Israeli schools have been closed in the area around Gaza and people are staying close to shelters. Around one million people lie within reach of those Gaza rockets.

The reporter begins again by emphasizing Israeli actions and Palestinian casualties. Palestinians ‘confirm’ that two ‘men’ were killed, while Israelis only ‘say’ they were attacking a terrorist rocket squad. Only after this does she mention the rocket attacks themselves.

Inside Gaza, you can hear the sound of Israeli jets circling overhead. There are around 1.6 million Palestinians who live there in densely populated areas. We already know that two civilians were killed yesterday, a young boy and an old man.

She continues, making sure we understand that Israel is deploying massive military force against helpless Palestinians. I rather doubt that ‘jets’ were ‘circling’; more likely helicopters and drones hit the rocket squads, but it sounds so much more frightening. We ‘already know’ — of course, we don’t, really — that two civilians were killed, and the suggestion is that this is just the beginning.

[Inskeep]: There have been rocket firings, many, many of them over the years, along that border. What caused an escalation here?

[Garcia Navarro]: Well, this current flare-up began when Israel targeted and killed the leader of one of the main militant groups in Gaza. Israel said he was planning an attack on Israeli civilians in the Sinai…

So we see that not only is this a story about Israeli violence against Palestinians, Israel started it. But the terrorist that was killed, PRC leader Zuhair Mussah Ahmad Qaisi, was responsible for an attack in southern Israel from the Sinai (not in the Sinai as the reporter incorrectly says) in August 2011 in which 8 Israelis were murdered, and it is quite credible that he was, as Israel says, about to launch another one (Qaisi was also responsible for the attack in which Gilad Shalit was captured in 2005, and also served as a conduit for money and weapons between Hizballah in Lebanon and terrorist groups in Gaza).

After Garcia Navarro talks about the remarkable success of Iron Dome in intercepting so many of the rockets, her partner cuts to the chase:

[Inskeep]: OK, no fatalities in Israel, quite a few of them on the Gaza side, is anyone talking seriously about a cease-fire?

Thus NPR manages to turn what should be a story about terrorism and defense against terrorism into one about the imbalance of power between Israel and the Palestinians, and how Israel initiated fighting which has killed Palestinian civilians (well, maybe one).

There is no mention that the event that began it was a classic case of eliminating a ticking-bomb terrorist, or that despitethe density of the population in Gaza, Israel is killing the fighters that are firing rockets without killing civilians.

Only a few lines of the report allude to the massive disruption of the lives of Israelis, who have been running to shelters for four days (read the story of an Israeli schoolgirl here). And there is no comment about the fact that the objective of the Arab terrorists is to kill as many Israelis as possible.

And here is something else you won’t hear about on NPR: despite the fighting, Israel is continuing to supply necessities to the Gaza population! Every day, truckloads of food, goods and cooking gas are supplied to Gaza through the border crossings. Yesterday more than 180 truckloads passed through the crossings. This morning, truck traffic was interrupted for a few minutes, when Palestinian terrorists attacked the trucks with mortars. Think about that.
Posted by GS Don Morris, Ph.D./Chana Givon at 4:20 PM