What we can learn from Salam Fayyad's threat 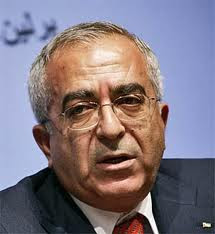 Prime Minister Salam Fayyad Monday condemned the Israeli deliberations on a bill submitted to the Knesset for declaring Jerusalem, including West and the East Jerusalem, to be the capital of Israel and the Jewish people.

Fayyad, in a press conference while signing a cooperation agreement between the Palestinian Investment Promotion Agency and Jordan Investment Board in Ramallah, stressed that no one has the right to decide the future of occupied East Jerusalem.

“There will never be a solution unless Jerusalem becomes the eternal capital of the Palestinian state,” said Fayyad, adding that the Israeli government, Knesset or any Israeli political party cannot deliberate on the Palestinian inalienable right to self-determination. There is a contradiction between the two statements. Fayyad is not saying that "no one has the right" to determine the future of the parts of Jerusalem across the Green Line, he is saying that only Palestinian Arabs have the right to determine it.

Palestinian Arab leaders can make such threats with impunity, and without any fear that any Western leaders or the UN will criticize the fact that they are essentially acting like the mob, saying that if you don't want to get hurt, do what they say.

An interesting subtext to his statement is that Fayyad is tacitly admitting that Israel wants peace and that Palestinian Arabs consider peace to be of secondary importance - not as important as getting their demands met. After all, there is no legal, logical or moral reason a solution must include Jerusalem as part of "Palestine." A solution can certainly be found - and reached quite quickly - if Palestinian Arabs would compromise on their demands. But if we take Fayyad's words at face value, he is saying that his people are less interested in a solution to the conflict as they are in gaining all of the land they claim exclusively.

The funny thing is that everyone knows this. Arabs know it, the UN knows it, the EU knows it: Israel craves peace and is willing to compromise to reach an agreement. Palestinian Arabs are more interested in getting 100% of their demands met - to them, it is more important than peace, or independence, or gaining a land that could be a refuge for the descendants of 1948 Arab refugees.

The relative priorities of both sides are neatly encapsulated by Fayyad's demand.
Posted by GS Don Morris, Ph.D./Chana Givon at 5:34 AM