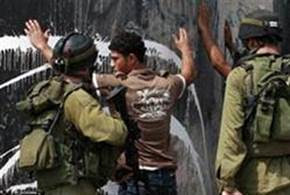 An observant IDF soldier may have prevented a major terrorist attack in a large Israeli city, in what soldiers and commanders called a “Hanukkah miracle.” An Arab terrorist who may have been on his way to the town of Har Bracha in central Samaria, was nabbed Tuesday morning when an IDF soldier arrested him, finding two large pipe bombs on his person.

What attracted the attention of the soldier was the unusually large bag the Arab was carrying. The soldier stopped the Arab, who was climbing up a hill that leads to Har Bracha, located near Shechem. The soldier grabbed the 18-year-old Arab's bag, and found in it not only the aforementioned pipe bombs, but also a molotov cocktail and ammunition. The Arab was immediately arrested and questioned. A search of the area by troops yielded a second bag with similar contents. It should be noted that the spot where the Arab was arrested is mere meters away from the former location of the Hawara checkpoint, which was removed at the orders of Prime Minister Binyamin Netanyahu and Defense Minister Ehud Barak. Arabs who attempted to smuggle weapons were routinely caught at this crossing, into and out of the Shechem area.

Samaria Council chairman Gershon Mesika phoned the commander of the brigade that arrested the Arab and thanked him for his and his soldiers' efforts.

“We salute the IDF for its work in preventing this attack, which could have been carried out against a major community in Samaria, or perhaps even a large city in the center of the country. Your soldier's awareness prevented this attack.

"But we cannot rely on miracles. I call on the government yet again to restore the Hawara checkpoint. Dozens of terrorists were caught there, and with its closure a terrorist can easily leave Shechem and reach the center of the country. We are blessed with wonderful soldiers who are doing holy work, and the government must give those soldiers the tools they need to stop terror."
Posted by GS Don Morris, Ph.D./Chana Givon at 5:00 PM