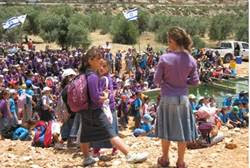 The Yesha Council explains that withdrawal from Judea and Samaria, and not settlements, is a demographic threat to Israel.

The Yesha (Judea and Samaria) Council has followed up on previous PR successes with a new video explaining why the “demographic threat” allegedly posed by Israeli life in Judea and Samaria is a myth. The idea that Arab natural growth outpaces Jewish growth and will eventually make Israel a majority-Arab state is a myth based on decades-old data, explains the star of the short film, actor Golan Azoulai. At one point, Arab women gave birth to an average of nine children, but today, the average Arab woman in Israel has 3.5 children, while the average Arab woman in Judea and Samaria has 3.2, he reveals. Jewish families have an average of just under 3 children each.

The film also notes that both Jewish birth rates and total Jewish births are on the rise, meaning, as Azoulai declares, “Time is working in our favor.” Net rates of immigration and emigration also strongly favor the Jewish majority, he notes.

However, he warns, there is a demographic threat to the Jewish majority between the Jordan River and the Mediterranean – the possibility of an Israeli withdrawal from historically Jewish regions in Judea and Samaria. If Israel withdraws in order to allow the PA to establish a new Arab state, the new state is expected to invite millions of foreign Arab “refugees” descended from those who fled Israel in the 1940s to seek citizenship – leading to an Arab majority in the region.

The demographic arguments raised in the video are not new, and have been explained in the past by experts such as demographer Yoram Ettinger. However, the new video has successfully made them easily understood and available to the public at large. It was released shortly before Rosh HaShanah, the New Year, to allow viewers to confirm the arguments made using the data published annually at this time on Israeli demographics.