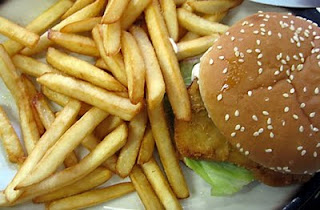 A new dietary supplement being developed by Israeli and American researchers could change the way our bodies digest cholesterol and sugar.
Hamburger and fries
The new citrus compound could cancel out the bad effects of eating a hamburger and chips, or other fast foods laced in sugar and fat.

Imagine an ice-cream sundae topped by a special chocolate sauce that will never let that blessed moment on your lips stay forever on your hips, or a pizza topping that you sprinkle over the cheese like oregano, made from a secret ingredient that will help your body break down all the fat, so that it won't clog your arteries.

These are some of the very real possibilities coming out of a Hebrew University-Harvard University team working on extracting naringenin, a compound from grapefruit, and using nanotechnology to make it into a complex absorbed 11 times better than normal. This may forever change the way our metabolisms deal with fatty and sugary food. The research on this citrus extract is led by Dr. Yaakov Nahmias from the Benin School of Engineering and Computer Science at the Hebrew University of Jerusalem and Maria Shulman, his graduate student. They have isolated the molecule that creates the bitter taste in grapefruits, and have strong clinical evidence that if developed as a dietary supplement, it could change the way our bodies deal with fat and sugar.

The studies hold significant implications for the drug market, particularly in relation to diabetes, obesity, arteriosclerosis and even hepatitis C, Nahmias tells ISRAEL21c while bouncing his new baby on his knee.

Nahmias is a young researcher by Israeli standards at age 37, because all men must serve in the military for three years. But he raced through the necessary milestones to become a full-fledged scientific investigator, completing a degree at the Technion-Israel Institute of Technology, a doctorate in Minnesota and post-doctoral work at Harvard.

In his study reported in the scientific journal PLoS One, he explained how under regular conditions the absorption of the fat- and sugar-busting molecule naringenin is quite low. You'd have to ingest a lot of grapefruits for it to work -- probably more than you'd ever want to eat.

To improve absorption capabilities, the researchers applied new tools from nanotechnology, and engineered a form of naringenin that includes an extra ring of sugar attached to the molecule. It is this extra ring that improves the absorption of naringenin and turns its bitter taste to sweet.

Harvard University and Yissum, the technology transfer arm of the Hebrew University, have filed for patents. Clinical trials are now being carried out in the United States.

According to the researchers, this is the world's first dietary supplement that affects our body in a positive way as it reacts with the food we eat. The new complex is not a difficult pill to swallow; Nahmias predicts it could best be applied directly to food before it hits the market.

But as a pill, it could potentially wipe a few other leading drug formulations off pharmacy shelves. It could be taken as a natural preventative measure against the buildup of lipids before cholesterol levels get high. Based on clinical studies now underway in Massachusetts General Hospital, it could even revolutionize the approach to the hep C virus.

As Nahmias explains, "Type II diabetes patients need to take drugs to make their body more sensitive to insulin. They also have problems with elevated lipids. Our clinical trial is for hepatitis C, which assembles on the LDL triglycerides. We've found [our molecule] can block the production of the virus."

In earlier studies, the scientists found that one dose of their new molecule given to rats before a high-sugar and high-fat meal reduced the creation of "bad" cholesterol, or very low density lipoprotein (VLDL), by 42 percent.

"The complex is special in that it is taken just before a meal, as a preventative measure," says Nahmias. This is completely different than statins, which are prescribed to people with high VLDL, usually to be taken for life.

"In comparison, existing medications are given only after the chronic development of abnormal lipid levels in the blood," says Nahmias, who hopes to work with industrialists to develop the product platform further.

Nahmias, a biologist and chemical engineer, believes he will follow this research through for the next few years in his quest to understand the way body cells "think" about the metabolism. "I want to try and reprogram metabolism. Some people have fast metabolisms, and some slow. Sometimes the intestinal cells are better or worse at absorbing intestinal sugar," he explains. "One can have very different fauna, or bacteria, in the intestines, which influence how the intestines break down fat and sugars."

It might be possible to lace a high-fat or high-sugar food, such as a doughnut, with his new compound to prevent the intestines from absorbing sugar, he says. "This is a very science fiction approach but we are really talking about changing the way we look at metabolic diseases, arteriolosclerosis and obesity.

"Instead of treating the symptoms, we are treating the cause. The cause is food. It all starts and ends with food, and the way our body reacts to it."
Posted by GS Don Morris, Ph.D./Chana Givon at 12:11 AM