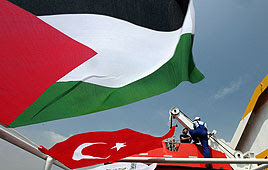 Members of Jewish community in France band together, send 500 letters of protest against Gaza flotilla, effectively preventing ship bought by organizers for €530,000 from docking in Marseille. 'Many battles left until September,' says one

One of the ships slated to participate in the flotilla to Gaza later this month will not set sail, Ynet has learned, less than a day after the Turkish IHH organization announced it was reconsidering its participation in the flotilla as well.

The ship was to set sail from the port of Marseille, but a lengthy battle by the French Jewish community has apparently succeeded in preventing it. Organizers of the flotilla issued a statement thanking participants Wednesday and urging them to seek other transportation, such as on ships departing from Greece and Turkey.


The French ship – one of 15 participating in the flotilla – was intended to carry a few dozen activists. Organizers bought the vessel for €530,000.


Ynet learned Wednesday that the ship was being prevented from docking in France thanks to pressure applied by parliament members and organizations on insurance local companies and authorities. The vessel is currently anchored in waters outside of Marseille, where it has been for the past four days.


"It's fantastic. Even we didn't believe this battle would lead to victory," a member of the French Jewish community told Ynet. He said he and other Jewish representatives had decided to join together to try to prevent the flotilla, and subsequently wrote letters of protest to 500 MPs and organizations.

"We acted fast, sent letters and warned all of the communities. We used social media and the internet, sent mail, set meetings, and made phone calls," he said. "We enlisted 15 non-Jewish organizations to support the battle, and together we warned all of the political parties with no ties to Israel about the consequences."


'A small battle in a large war'

On Tuesday the battle came to a hilt when Jewish MP Jacques-Alain Bénisti but a query to French Foreign Minister Alain Juppe, asking to learn France's official position on the flotilla. The move was said to have put pressure on local insurance companies and helped to cancel the French ship's participation.


"We feel great joy, but we know that this is just a small battle in a larger war. There are many battles left until September. We must not claim victory, only rejoice in the united front we have presented and move on," a source from the Jewish community said.


"The next goal is to take control of the online field, appeal to youths, explain to them our position, and offer incentives to work with us."


Earlier Wednesday, Turkish newspaper Hurriyet reported that the IHH is considering canceling the flotilla following developments in the region, particularly in Syria. "We think we can achieve our goals regardless of whether we send the Marmara ship to Gaza or not. We shall make a final decision by the end of the week," the IHH spokesman said.


IHH senior official Hussein Uruç confirmed the report saying the group is rethinking the departure date but that preparations are still underway. "Tomorrow we shall make a final decision on the matter, but right now there is still one date and there are no problems with the flotilla," he said.