The UN Vote on a Palestinian State 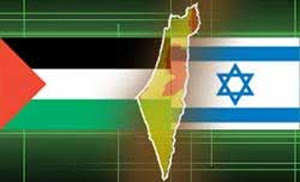 
In September the United Nations will attempt to create a Palestinian state through political mandate. It should be obvious to anyone who has observed UN action in recent years that this is not merely an attempt to justify the political aspirations of Palestinians, but rather to punish Israel. This initiative should be seen against a backdrop of Muslim imperial ambitions.

In fact, Israel is directly on the fault line of Islam’s territorial aims. This tiny nation of six million is the bulwark in the war with jihadists. Facing close to 300 million enemies in nations nearby Israel stands between survival and defeat of the West. Those Israeli eighteen year olds who are sent into battle allow parents in the United States to sleep restfully as their eighteen year olds go off to college. But make no mistake, Israel is the defender of our interests, the first line of defense in “the long war.” This, of course, is a thin reed on which to rest a civilization, but it is a steel reed that time and again has demonstrated its mettle. Many in Europe and a growing population in the United States contend Israel should be abandoned in order to address Muslim grievances. But should this position gain traction, it would not bring solace to the West. It would merely mean our principles have been compromised. A world without Israel would not be a safer place; it would usher in a tide of aggression as Islamists see the West bend to their will. If Israel goes, the fragility of the West will become apparent.

As a consequence, it is time for a wake-up call. Liberty is in the cross-hairs and the defender of that liberty, of our liberty, are the children of Israel. They are our chosen people sacrificing their blood so we may remain immune to the incursions of Islamic imperialism.

It is instructive that Islam is more than a religion; it is a religion qua political movement. Through sharia there are rules for society and for the behavior of every individual. Make no mistake, as presently constituted, Islam is not compatible with democracy. The pillars of democratic capitalism – individual rights, the rule of law, the preservation of private property, equality of women – are simply not part of Islamic tradition.

This is what Samuel Huntington understood to mean the conflict of civilizations. Most religions, of course, distinguish between believers and non believers, but Islam goes further drawing a capital distinction between political – legal regimes: those in submission to Islam and those in rebellion. Since the West is largely in rebellion, it is the challenge to be overcome.

That UN vote in September should be understood against this setting. Here is a systematic effort to vanquish western civilization, using the Palestinian question as a tactical instrument. Fifty seven Muslim nations have raised the stakes in this ongoing struggle and if there were ever a time for the western nations to mobilze their influence and assert the Judeo-Christian tradition that is the foundation stone of our way of life, this is it. Israel may be on the front-line in this struggle, but what is in question involves every person in the West.

You can find this online at: http://www.familysecuritymatters.org/publications/id.9551/pub_detail.asp
Posted by GS Don Morris, Ph.D./Chana Givon at 3:56 PM