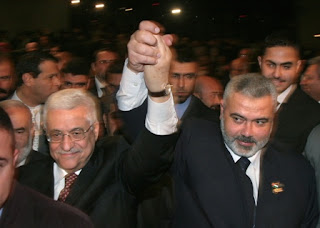 
Abbas with Hamas PM Haniyeh
Washington, May 17 -- Palestinian Authority President Mahmoud Abbas’ intention to seek unilateral recognition for a Palestinian state is really a program to hound Israel in international organizations, return it to indefensible borders and flood it with millions of Arab refugees and their descendants. In short, it is a blueprint for the destruction of the Jewish state.

Abbas’ strategy, as outlined in the New York Times May 17, would allow the Palestinians to circumvent negotiations with Israel – negotiations intended to ensure both states can live side by side in peace.

Instead, Abbas would have Israel return to pre-1967 borders that would pose insurmountable threats to the continued existence of Israel as a Jewish state. "Despite the many changes -- or perhaps because of the many changes that have taken place in the region -- it's more vital than ever that both Israelis and Palestinians find a way to get back to the table and begin negotiating a process whereby they can create two states living side by side in peace and security," President Obama told reporters following his meeting Tuesday with Jordan's King Abdullah.

Notably, Abbas’ plan comes on the heels of his alliance with Iran-backed Hamas, a terrorist group that doesn’t accept Israel’s existence, promotes violence and refuses to recognize previous agreements between Israel and the Palestinians. This year alone, Abbas’ new partner and its allies have fired 328 rockets and mortars at Israeli civilians.

Abbas’ plan doesn’t bother to address Hamas’ charter, which advocates murdering Jews and doing away with the peace process: “The hour of judgment shall not come until the Muslims fight the Jews and kill them. Peace initiatives, so-called peaceful solutions, and the international conferences to resolve the Palestinian problem, are all contrary to the beliefs of the Islamic Resistance Movement.”

Indeed, Abbas is seeking unilateral recognition for a Palestinian state when his party’s own charter has yet to recognize Israel. The original 1968 Palestinian Liberation Organization charter called for the “liberation” of Palestine as a “national duty.” In the treaty signed between Israel and PLO Chairman Yasser Arafat in 1993, the official PLO charter was set to be changed to recognize Israel, pending approval of the Palestinian National Council, but in the intervening 18 years, the council has yet to approve that revision.

If Abbas has his way, the so-called right of return would bring an estimated 4.8 million Palestinian refugees and descendants to Israel. Israel currently has just over 7 million people, 20 percent of whom are Arabs; under Abbas’ strategy, Israel’s existence as the only Jewish homeland would come to an end. Abbas would have Israel become yet another Arab state.

Israeli Prime Minister Benjamin Netanyahu laid bare the true nature of the Palestinian’s plan earlier this week in an address to the Knesset: “Tthe root of this conflict…is, and always has been, [the Palestinians’] refusal to recognize the Jewish state. It is not a conflict over 1967, but over 1948, over the very existence of the State of Israel.”

“The Palestinians regard…the foundation of the State of Israel, their nakba, their catastrophe. But their catastrophe was that they did not have a leadership that was willing to reach a true historic compromise between the Palestinian people and the Jewish people. Regrettably, since then until this day, they have not had a leadership that is prepared to recognize the State of Israel as the national homeland of the Jewish people. That has not happened yet.”