The Next Declaration of Palestinian Statehood 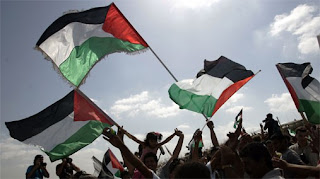 On Tuesday, the United Nations published a report by its Middle East coordinator claiming that the Palestinian Authority is prepared to govern a state of its own, and that any challenges it faces would be the fault of the continued Israeli “occupation.”

The report is another step toward the declaration of a Palestinian state with the imprimatur of the United Nations. Just a few months ago the Palestinian leadership of Mahmoud Abbas and Salam Fayyad were threatening unilateral declaration through the UN Security Council, though that would be subject to an almost certain veto by the U.S. This time, the Palestinians are seriously floating a plan to call for a vote on statehood by the full General Assembly this coming September. But as University of San Diego law professor Abraham Bell pointed out, this would not enable the Palestinians to avoid the American veto.

Bell said that if the U.S. vetoes the resolution at the Security Council, the Palestinian Authority would be denied statehood, but that in the General Assembly the Palestinians would likely have the votes for a supermajority. If the Palestinians get only the supermajority vote in the General Assembly, their status would not change one iota under international law. “It doesn’t make something that wasn’t a state into a state. And failure to win the vote, doesn’t make what is a state, not a state.”

But that doesn’t mean the Palestinians would gain nothing from the vote, even if the resulting resolution is nonbinding. The Heritage Foundation’s Brett Schaefer, author of ConUNdrum: The Limits of the United Nations and the Search for Alternatives, said that the Palestinians could still open certain legal doors with such a vote, and would certainly reap some diplomatic benefit from it.

“It’s obviously a political coup for the Palestinians, because what it does is it signals widespread recognition of them as an independent state,” Schaefer said. “It could lead to diplomatic recognition individually among states in increasing numbers. And it does give them more leverage over certain things including, potentially, joining the International Criminal Court, as a participant in that. That’s a double-edged sword. One ramification of that, should it happen, would be that any attacks that Israel launches on Palestinian territory could be subject to the jurisdiction of the ICC. However, the Palestinians themselves would also be subject to that jurisdiction. I think that the Palestinians would want to think long and hard about whether they’d want to subject themselves and the actions of Hamas, who operate in their territory, to that type of jurisdiction.”

Ironically, Bell said it is Hamas in Gaza that possess the legal prerequisites to form a state—not Fatah, which controls the West Bank and runs the PA.

“Hamas in Gaza has the legal ingredients, which are territory, a population, government, and a capacity to carry on foreign relations,” Bell said. “So if they declare themselves to be a state, I think they are a state. They don’t apparently have any interest. And then you have Fatah, which controls some authority in the West Bank, though under Israel, and I don’t think they have the ingredients. Do they have territory? It’s doubtful; they don’t really control exclusively any territory. Do they have a government? Yes, but it’s subordinate to Israel under the agreements. They have a population; they have the capacity to carry on foreign relations. So I think they’re missing ingredients. The General Assembly voting to say that they’re a state doesn’t make them actually one if they’re missing legal ingredients. And they’re the ones who are going to be pressing for this vote.”

Both Bell and Schaefer agreed that the vote would be designed to put diplomatic pressure on Israel. Bell referenced the vote the PLO called for in 1988, which was intended to pressure Israel into unilaterally relinquishing territory that UN member states now recognized as part of “Palestine.”

Amir Mizroch, former executive editor of the Jerusalem Post, believes it would accomplish just that—if the Palestinians invoked UNGA Resolution 377, also known as the “uniting for peace” resolution. It states that the General Assembly may take matters into its own hands if the Security Council fails to uphold its responsibilities to maintain peace. If the Palestinians won a GA vote after invoking 377, Mizroch wrote on his website, it would put Israel in an exceedingly difficult situation diplomatically.
Click here to continue reading
Posted by GS Don Morris, Ph.D./Chana Givon at 12:41 PM