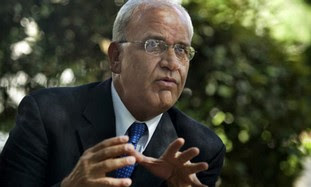 Some 10 EU countries are scheduled to upgrade the status of Palestinian representative offices in their capitals in the near future, Chief PLO negotiator Saeb Erekat declared on Sunday.

The move means that Palestinian missions would move a step closer toward becoming embassies whose workers enjoy full diplomatic immunity. Erekat said that the move follows Norway’s recent decision to upgrade the status of the Palestinian representative office. Moreover, the move comes in wake of three South American countries to recognize a Palestinian state on the 1967 borders, he added.

A PA official told The Jerusalem Post that the decision to seek international recognition of a Palestinian state was designed to shift the conflict from one over “occupied Palestinian territories” to one over an “occupied state with defined borders.”

Erekat said that the Palestinian position has earned the support of a majority in the international community.

Erekat did not say which EU countries were expected to upgrade the status of the Palestinian representative missions. Earlier this week, the PA said it has appealed to several EU countries separately to recognize a Palestinian state on the 1967 borders.

The PLO negotiator said that Norway’s decision to upgrade the status of the Palestinian office to an embassy level had “embarrassed and worried” the Israeli government. “The Israelis are afraid that the issue of recognition of a Palestinian state would enter the EU,” he said. “We urge the international community to salvage the two-state solution by recognizing a Palestinian state on the 1967 borders.”

Erekat said that the issue of recognizing a Palestinian state was a “free, independent and sovereign” matter for each country. The US Administration, he said, can’t prevent other countries from practicing their sovereign right.

Nabil Sha’ath, another member of the PA negotiating team, said that the Palestinians would accept nothing less than an independent state on the 1967 borders, with Jerusalem as its capital, and the “right of return” for refugees.

He ruled out the possibility that the Palestinians would resort at this stage to an armed struggle against Israel, saying that the best option for now was a “popular struggle.”
Posted by GS Don Morris, Ph.D./Chana Givon at 8:25 PM