Hizbullah: We are ready for another war with Israel 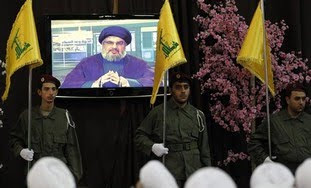 Nasrallah says group will "cut the hand" of anyone who tries to arrest any member of the party in connection with Hariri assassination.

Hizbullah is ready for another war with Israel, said the group's leader Hassan Nasrallah in a televised speech on Thursday evening.

Referring to what he termed Israel's habit of becoming involved where it is not welcome, he emphasized that his Lebanese terrorist group is not at all afraid of future conflicts. With progress in the UN Special Tribunal for Lebanon (STL), charged with investigating the 2005 Rafik Hariri assassination, and the Hizbullah indictments expected, Nasrallah also said that Hizbullah will "cut the hand" of anyone who tries to arrest any member of the party.

"Those who imagine that we will allow the arrest or detention of any of our fighters are mistaken," he told thousands of supporters in south Beirut through video link. "We will cut the hand that reaches out for any one of them."

The Netherlands-based tribunal investigating the killing is expected to issue indictments in the coming months.

Denying outright any involvement in the assassination, he said that the group would not accept any accusation against any of its fighters or leaders.

"Those who think that the resistance will not defend itself and its dignity against any accusation are mistaken," he added.

On Wednesday, Press TV reported that Hizbullah had urged the Lebanese government to deal with the issue of false witnesses in the investigation tribunal.

The appeal came as the Lebanese government failed to reach an agreement about the issue after a four-hour meeting on Wednesday.

Hizbullah said the tribunal is marred by witnesses who gave false information.

AP contributed to this report.